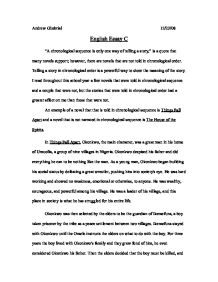 Okonkwo returned to his village after his exile to find it a changed place because of the presence of white men. He and other tribal leaders tried to reclaim their hold on their native land by destroying a local Christian church that has insulted their gods and religion. In return, the leader of the white government took them as prisoners and held them for payoffs for a while, further humiliating and insulting the native leaders. The people of Umuofia finally gathered for what could be a great revolution, and when some messengers of the white government tried to stop their meeting, Okonkwo kills one of them. He realized with despair that the people of Umuofia are not going to fight to protect themselves because they let the other messengers escape and so all was lost for the Ibo tribe. When the local leader of the white government came to Okonkwo's house to take him to court, he found out that Okonkwo hanged himself, ruining his great reputation. ...read more.