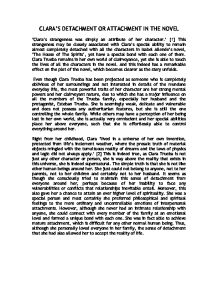 Clara Trueba in the House of the Spirits

CLARA'S DETACHMENT OR ATTACHMENT IN THE NOVEL 'Clara's strangeness was simply an attribute of her character.' [1] This strangeness may be closely associated with Clara's special ability to remain almost completely detached with all the characters in Isabel Allende's novel, 'The House of The Spirits', yet have a special bond with each one of them. Clara Trueba remains in her own world of clairvoyance, yet she is able to touch the lives of all the characters in the novel. And this indeed has a remarkable effect on the plot of the novel, which becomes clearer as the story unfolds. Even though Clara Trueba has been projected as someone who is completely oblivious of her surroundings and not interested in details of the mundane everyday life, the most powerful traits of her character are her strong mental powers and her clairvoyant nature, due to which she has a major influence on all the members of the Trueba family, especially her husband and the protagonist, Esteban Trueba. She is seemingly weak, delicate and vulnerable and does not possess any authoritarian features, but she is still the one controlling the whole family. ...read more.

Moreover, this also gave her a chance to attain an ever higher level of spirituality. She was a special person and most certainly she preferred philosophical and spiritual feelings to the more ordinary and uncontrollable emotions of interpersonal attachments. However, although she never had an intimate relationship with anyone, she could connect with every member of the family at an emotional level and formed a unique bond with each one. She was in fact able to achieve mature attachment, which is difficult for any other normal human being. Thus, although she personally loved everyone in her family, the sense of detachment that she had also allowed her to accept the reality of life. Clara also remains far away from the lives of her children, Blanca, Jaime and Nicolas, as she doesn't even get to know when they're all grown up. However, in spite of this, she is the first one to know about Blanca's imminent divorce with Jean de Satigny. She also senses her parents' as well as her sister in law, Ferula's deaths and is constantly predicting the future of the Trueba family. ...read more.

Even after her death, Clara's ghost convinces her granddaughter Alba to fight for her life, because it is indeed worth living. Ultimately, Clara is actually able to observe all her surroundings silently, yet sharply and she knows the exact states of mind of everyone around her. This enables her to write journals in which she writes all the occurrences that happen in her life and therefore the book becomes a testimony of the events that took place in the time. It is only because of Clara's detachment from the people that she can freely write the most important details of their lives, because she actually knows them inside out. It is because of these writings that Alba is finally able to piece together the story that makes up the novel, 'The House of the Spirits'. Although Clara has always been away from everything that happens in the novel, in the end, we realize that she has in fact been closer than anyone all along, and this is what has shaped the main plot of the novel. Footnotes [1]: Allende, pg.7 [2]: Allende, pg.83 ...read more.