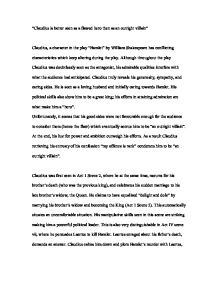 &quot;Claudius is better seen as a flawed hero then as an outright villain&quot;

Claudius, a character in the play “Hamlet” by William Shakespeare has conflicting characteristics which keep altering during the play. Although throughout the play Claudius was doubtlessly seen as the antagonist, his admirable qualities interfere with what the audience had anticipated. Claudius truly reveals his generosity, sympathy, and caring sides. He is seen as a loving husband and initially caring towards Hamlet. His political skills also show him to be a great king; his efforts in attaining admiration are what make him a “hero”.

Unfortunately, it seems that his good sides were not favourable enough for the audience to consider them (hence the flaw) which eventually accrue him to be “an outright villain”. At the end, his lust for power and ambition outweigh his efforts. As a result Claudius retrieving his entreaty of his confession “my offence is rank” condemns him to be “an outright villain”.

Claudius was first seen in Act 1 Scene 2, where he at the same time, mourns for his brother’s death (who was the previous king), and celebrates his sudden marriage to his late brother’s widow, the Queen. He claims to have equalized “delight and dole” by marrying his brother’s widow and becoming the King (Act 1 Scene 2). This automatically situates an uncomfortable situation. His manipulative skills seen in this scene are striking making him a powerful political leader. This is also very distinguishable in Act IV scene vii, where he persuades Laertes to kill Hamlet. Laertes enraged about his father’s death, demands an answer. Claudius calms him down and plots Hamlet’s murder with Laertes, such a scheme that “even his mother shall uncharged the practice and call it accident”. The king incites Laertes “what would you undertake to show yourself in deed your father’s son, more than words?” Laertes reply with the very words the king sought “to cut his throat i’th’ church”, this shows the success of the king’s manipulative skills; he convinced Laertes to murder and made it seem like it was Laerte’s duty to avenge his father death. Although his shrewd characteristics are evident here, his political skills are admirable.

Other than his political skills, Claudius has other admiring qualities which could also entitle him a “hero”, but they are often overlooked (thus the flaw). Claudius is always seen as referring to Queen Gertrude by “sweet Gertrude” or “dear Gertrude”. Claudius’ love for Gertrude can also be accountable in Act IV Scene vii, where Laertes asks Claudius why he hasn’t taken any action against Hamlet, knowing that Hamlet is trying to kill him. King Claudius replies with “the queen, his mother almost lives by his looks…she is so conjunct to my life and soul” that he cannot deceive and live by seeing her hurt.

Although Hamlet despised Claudius throughout the play, Claudius always tried to be loyal and fatherly towards Hamlet, trying to console Hamlet when he was distressed about his father’s death (Act I, Scene ii) He encourages Hamlet to “throw to earth” and regards Hamlet as a loving son “with no less nobility of love”, and shows his love and concern for him by requesting him to stay in Denmark “we beseech you bend you to remain, here in the cheer and comfort in our eye”.

But just when Hamlet starts acting mad, Claudius worried about his power to the throne, spies on him with Polonius and observes Hamlet’s behaviour (Act III Scene i). This shows the development of his guilt. He desperately wants to know the reason behind Hamlet’s madness. In this scene, Hamlet, not knowing the king’s presence, reveals “all but one shall live”, Claudius threatened by Hamlet’s revelation, declares “I like him not, nor stands it safe with us to let his madness range” (Act III Scene iii) he immediately decides to send Hamlet to England. (Act III, scene i). But shortly, he agrees with Polonius’s suggestion of “his Queen mother should all alone entreat him”. This is hypocritical as he does not think about the Queen’s safety, Claudius' love for Gertrude may be truthful, but can it be that he married her for his own personal gain of the throne? Claudius fears that Hamlet will take over his kingdom, in that case, does he care about Denmark? Consequently does that make him a good king?

Claudius tries his best to restrain himself from revealing any guiltiness until the “play within the play” had strained him to do so. The play directed by Hamlet, portrayed how Claudius killed King Hamlet. The play’s success exposed Claudius’ guilt as he is taken aback to but it. His guilty conscience drove him mad, and Claudius soon becomes plagued by his murder of King Hamlet. Soon afterwards he expresses his soliloquy in Act III, scene iii, which confirms that Claudius has indeed killed Hamlet’s father. Given the opportunity to label him a villain, his repent to god amend the situation, “O, my offence is rank” he admits. “To be forestalled ere we come to fall or pardons, being down? Then I’ll look up: my fault is past”. He wants to break free from his past sins as his “stronger guilt defeated his strong intent”. “Help, angels, make assay” he pleads. This site of the strong, manipulative King, pleading down to the angels and god for forgiveness makes the audience sympathize with him, now that he admits that his “offence is rank”. But contradictorily, although Claudius wants to repent and free himself from this tormented guilt, he does not want to give up what he gained from it: his crown, his queen, his position and power. Claudius is regretful but fails to repent. He realizes that his repent will not be accepted if he is still possessed with “those effects for which he did the murder, his crown, his ambition and his queen” (Act III, scene iii). Rather than redeeming, he decides to take back his appeal “My words fly up, my thoughts remain below, Words without thoughts never to heaven go”. These last words reveal that his attempt to pray has failed, slamming him right back to being a lustful, greedy, and evil villain.

Although Claudius has undoubtedly many good qualities (his political skills, his affection towards Gertrude, his initial care for hamlet), his lust for power and ambition overweigh them. Claudius desired power and ambition over redeeming himself. This lust for power and ambition is what caused Claudius his flaw. All the positive attributes that Claudius has are now seen as dubious. His love for Gertrude was evident, but it was also alleged that he had not thought about the Queen’s safety when he claimed that Hamlet was “dangerous”. Towards the end, it was Claudius’ scheme of killing Hamlet that led to Gertrude’s, whom he evidently loved, death. The queen drinks the poison which Hamlet, as Claudius had planned, was supposed to drink. Claudius lets the queen die rather than risk exposure despite his vaunted love for her.

At the end his “stronger intent” did defeat his “strong guilt”, the opposite of what he said earlier in the prayer scene. Finally it was Claudius’ scheme of killing Hamlet that led to Gertrude’s death, his manipulation that provoked Laertes to kill Hamlet, lead to Laertes’ death and lastly, Hamlet finally avenging his father’s death and at that point additionally his mother’s death, Claudius’ own death.

His failure in repenting and his choice of retrieving back his repent rather than redeeming himself, marks him a villain. He wanted to pursue his present life to its fullest, by enjoying his gains. But at the end, his lust for power and ambition did not convoy him into the contentment which he had planned. One by one his desires deceased, and at the end, so did he. His effort in trying fit into the role of being a loving husband, father, an admiring King and then attempting to repent is what made him a “flawed hero” until these good attributes were soon overpowered by his graving lust for power and ambition. As a result, what defined him as a “flawed hero” was soon slammed by what truly defines him, “an outright villain”.