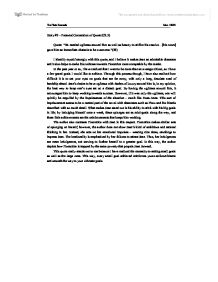 Entry #2 - Personal Connection of Quote (Ch.2) Quote: "He needed ugliness around him as well as beauty to stiffen his resolve...[his room] gave him an immediate obstacle to be overcome."(28) I identify myself strongly with this quote, and I believe it makes Jean an admirable character and it also helps to make his coldness towards Florentine more acceptable by the reader. In the past year or so, I have realized that I want to be more than an average citizen, so I have a few grand goals I would like to achieve. Through this process though, I have also realized how difficult it is to set your eyes on goals that are far away, with only a long, desolate road of hardship ahead. Jean's desire to have ugliness with dashes of luxury around him is, in my opinion, the best way to keep one's eyes set on a distant goal. By having the ugliness around him, it encourages him to keep working towards success. However, if it was only the ugliness, one will quickly be engulfed by the hopelessness of the situation - much like Rose-Anna. This sort of imprisonment seems to be a central part of the novel with characters such as Pitou and his friends described with so much detail. What makes Jean stand out is his ability to stick with his big goals in life; by indulging himself once a week, these splurges act as mini-goals along the way, and these little achievements are the reinforcements that keeps him working. The author also contrasts Florentine with Jean in this respect. Florentine makes similar acts of splurging on herself; however, the author does not show Jean's kind of ambitious and rational thinking in her. Instead, she acts on her emotional impulses - wearing nice dress, stockings to impress Jean. The irrationality is emphasized by her failures to attract Jean. Thus, her indulgences are mere indulgences, not serving to further herself to a greater goal. ...read more.

I can hardly remember the last time I possessed this many things! Of course, the army tells us that all this stuff strictly belongs to the army and can be taken away at anytime, but I would do such a nice job of whatever they tell me to that they'll be giving me more of their stuff very soon. At night, I went on my first shift doing sentry watch at the armoury. I felt pretty excited to finally be doing some soldierly business - I held a rifle in my hands! I guess this would be my first ever formal job, and I'll be making a few bucks of my own to save up for once, since all the everyday needs are taken care of for us soldiers. I hear some of the more experienced guys say that this is the most gruelling duty there is, but I think it's great! I feel my life going somewhere, the constant sound of my new boots hitting the asphalt wakens the life in me that's stayed dormant for so long. What's more, I can see all the civilians walking by and they can see me! For once, I stand out in a crowd, I'm a somebody, and I have their respect, or at least their attention. The great big rifle with the bayonet attached at the end probably had something to do with all that too. All in all, it beats sitting and rotting away in the back of Ma Philbert's. Later on Emanuel came by too. That was really quite exciting for me, just imagining us storming the battlefield together - me, Alphonse and Manuel! At 2 in the morning, I was relieved, and as I got into my warm bunk, this thought came across my mind - I'm getting paid to shoot and be shot at. Entry #6 - Comparison of Weddings (CH.30) ...read more.

It'll be counted in my favour" (119B) -->F. expects a reward, selfish or extremity of poverty? -"She could imagine her mother's astonishment at seeing her come home in a taxi." (140B) -->Shows F.'s poverty. - Chapter 12 = end of winter, which is symbolic of Florentine's relationship with Jean? -->"He had disappeared with the last rough storm of winter." (165T) -"Knowing how Rose-Anna had hated Lachance, he hoped to hear an instant protest..." (154T) -->Azarius's refusal to accept reality = his weakness? -"Her tenderness was almost always concealed behind a look that was discreet..." (164T) -->illusion? Concealing her feelings. -"measuring what pain each joy would cost." (177M) -->Irony, shows degree of suffering and poverty. - Page 201 reveals that Jean was an orphane. -"...feel himself above them and predestined for higher things." (203T) --> Jean is like Ryuji, shows ambition. -"The satisfaction of owing his success only to himself filled him with pride." (203B) -->Jean is driven by pride. -"She was all that he hated ... his own wretchedness and sadness that he held in his arms." (205B) -->Explains Jean's attitude towards Florentine. -"...crossed the square to meet this bright, skin-tight, flashy dress." (245B) -->Diction: meets "dress" not the person. Increases the detestability of Eugene's action. -"... that life is good to some and unkind to others." (248M) -->The Lacasse's poverty could be due to their having too many kids, so it's their own fault, yet they blame the world = human condition of laziness, lust? Lack of discipline? -"'On the other side there was an old guy...the old guy who'd had his future already...'" (311M) -->Old guy and young guy are symbols of Alphonse's past and future? -"Peace has been as bad as war..." (313B) --> Shows the extremity of poverty. -"Since they'd been together he had seen her make up her face three or four times" (325T) -->theme of illusion, shows F.'s insecurity, and her lack of interest in Eman. Or too much interest in herself? -"She subsided into a marvellous forgetfulness..." (337T) --> F. is using Eman. as her escape. ?? ?? ?? ?? Tin Flute Journals Mar. 18/09 ...read more.