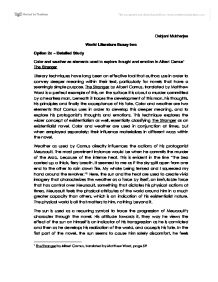 Debjani Mukherjee World Literature Essay two Option 2c - Detailed Study Color and weather as elements used to explore thought and emotion in Albert Camus' The Stranger Literary techniques have long been an effective tool that authors use in order to convey deeper meaning within their text, particularly for novels that have a seemingly simple purpose. The Stranger by Albert Camus, translated by Matthew Ward is a perfect example of this, on the surface it is about a murder committed by a heartless man, beneath it traces the development of this man, his thoughts, his principles and finally the acceptance of his fate. Color and weather are two elements that Camus uses in order to develop this deeper meaning, and to explore his protagonist's thoughts and emotions. This technique explores the wider concept of existentialism as well, essentially classifying The Stranger as an existentialist novel. Color and weather are used in conjunction at times, but when employed separately; their influence materializes in different ways within the novel. Weather as used by Camus directly influences the actions of his protagonist Meursault. The most prominent instance would be when he commits the murder of the Arab, because of the intense heat. This is evident in the line "The Sea carried up a thick, fiery breath. ...read more.

While weather was used to influence Meursault's actions, color is employed by Camus to reflect Meursault's thought process and his emotions. Meursault observes color intently as he is completely immersed in the physical world in the first part of the novel. Red features prominently as an indicator of violence, death and aggression. At his mother's funeral, Meursault describes his mother's burial as "... the blood - red earth spilling over Maman's casket, the white flesh of the roots mixed with it..."4 The red earth reflects the death of his mother, the white represents the empty feeling he associates with it. The line could be seen as an allusion to his ambivalent feelings towards his mother's death, guilt at not being able to conform to society's expectations, represented by red, and awareness that his mother's death has not caused him to feel anything; therefore he is empty, represented by white. Yellow and green appear occasionally in the course of the novel as well, to reflect certain aspects of Meursault's thinking, and emotions. After an enjoyable dinner at Celeste's, Meursault says "The sky was green; I felt good."5 Green here represents contentment, and a certain tranquil calm that enables him to live in the moment, with his simple concerns and thoughts. ...read more.

They symbolize the very essence of existentialism, a focus on the absolute, what is tangible and present rather than something unidentifiable and abstract. Existentialists focus on concrete human existence, Camus has alluded to this by employing weather and color as techniques in the novel to illustrate his protagonist's thoughts. The development of these symbols, the Sun in particular and what it means to Meursault is indicative of Camus' own thoughts towards existentialism. His character Meursault is resolved of his struggle in the end; he reaches a stage where he accepts his impending death. By doing this, Camus encourages the reader to persevere in spite of absurdity. He cites it as an obstacle to overcome rather than a reason for ending ones life, which is the common outcome of an existentialist's thinking. Thus, Albert Camus makes use of color and weather to convey certain deeper connotations of the novel, as well as to indicate his protagonist's existentialist tendencies, and his own thoughts on this philosophy. He uses symbols, vivid imagery and contrast to highlight the conflict within Meursault, which is an important facet of the novel. His symbolic presentation of the sun traces Meursault's character development, from a man removed from most of the world, to a man who accepts his fate and truly appreciates the world around him. These are the elements that contribute to the depth of a novel, give it many layers that provoke thought within the reader. ...read more.