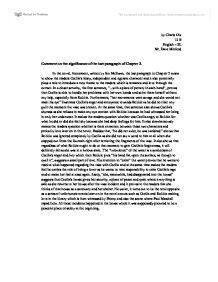 by Charis Ow 12 B English - SL Mr. Dave Minford Comment on the significance of the last paragraph of Chapter 2. In the novel, Atonement, written by Ian McEwan, the last paragraph in Chapter 2 exists to show the readers Cecilia's feisty, independent and egoistic character and it also potentially plays a role to introduce a new theme to the readers which is romance and love through the extract. In a closer scrutiny, the first sentence, "...with a piece of pottery in each hand", proves that Cecilia is able to handle her problems with her own hands and solve them herself without any help, especially from Robbie. ...read more.

It also simultaneously makes the readers question whether is there attraction between these two characters and probably love later on in the novel. Besides that, "he did not exist, he was banished" shows that Robbie was ignored completely by Cecilia as she did not say a word to him at all when she stepped out from the fountain right after retrieving the fragments of the vase. It also shows that regardless of what Robbie ought to do at that moment to gain Cecilia's forgiveness, it will definitely fail as she was in a furious state. The "turbulence" of the water is a symbolism of Cecilia's anger and fury which then Robbie puts "his hand flat upon the surface, as though to quell it", suggests a small part of love. ...read more.

Lastly, "she, meanwhile, had disappeared into the house" suggests that Cecilia's house gives her security, a place of peace and quiet where everything is safe as she returns to her house after the vase incident and it proves to the readers that she thinks of that house as a sanctuary and her shelter. However, it turns out to be the total opposite as a series of unfortunate events later on in the novel occurs such as Cecilia and Robbie making love in the library which is then witnessed by Briony and also the scene where Paul Marshall raped Lola. All these incidents happened in the house where it was supposedly pictured to be a peaceful place of safety at the beginning. ...read more.