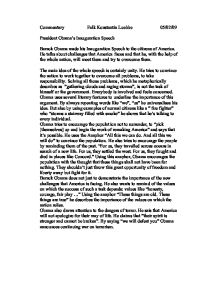 Commentary Falk Konstantin Luebbe 05/02/09 President Obama's Inauguration Speech Barack Obama made his Inauguration Speech to the citizens of America. He talks about challenges that America faces and that he, with the help of the whole nation, will meet them and try to overcome them. The main idea of the whole speech is certainly unity. He tries to convince the nation to work together to overcome all problems, to take responsibility. Solving all those problems, which he metaphorically describes as "gathering clouds and raging storms", is not the task of himself or the government. Everybody is involved and feels concerned. Obama uses several literary features to underline the importance of this argument. By always repeating words like "we", "us" he universalises his idea. But also by using examples of normal citizens like a "fire fighter" who "storms a stairway filled with smoke" he shows that he's talking to every individual. ...read more.

Using the anaphor "These things are old. These things are true" he describes the importance of the values on which the nation relies. Obama also draws attention to the dangers of terror. He sais that America will not apologize for their way of life. He claims that "their spirit is stronger and cannot be broken". By saying "we will defeat you" Obama announces continuing war on terrorism. After this general overview over the speech a more detailed view on the literary techniques in the last part of Obama's speech, part 6, shall follow. In the last part of his speech, Obama sets some examples of normal citizens who could be an examples for a good citizen. He's talking about workers who would "rather cut their own hours than see a friend lose his job". He tries to set good examples for everyone and by picking a normal individual shows that everybody is involved and can change something. ...read more.

He tries to clarify that he's just a ordinary man and that he cannot succeed without the full support of everyone. And this is the one thing which makes him different from other people. He is able to unify the people and make them follow him to the final aim. This can by the way also be quite dangerous taking into account that this was one of the major values of Adolf Hitler. However, Obama also argues quite vague in his speech: Though he claims that he wants to meet challenges like the banking crisis, terrorism and global warming, he doesn't quite explain how he's going to do it. He explains that success is only possible with the support of all, but leaves everybody in the dark about what his exact steps will be and what his part in this game will be. In fact, Obama has done the right thing damping down the expectations. The disappointment would be too big if he should fail. No one should be to optimistic before first results exist. ...read more.