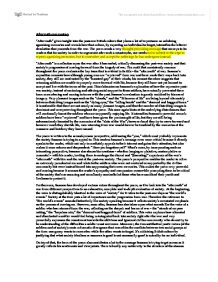 Commentary on Aftermath by Sassoon

Aftermath commentary "Aftermath" gives insight into the post-war British culture that places a lot of importance on subduing agonizing memories and reveals how that culture, by expecting an individual to forget, intensifies the leftover desolation that proceeds from the war. The poem sends a very thought-provoking message that conveys to its readers that for society in order to regenerate after such a catastrophe, one needs not to submit to the urge to repress agonizing memories, but to remember and accept the sufferings he has undergone instead. "Aftermath" is a reflection upon the war after it has ended, critically discussing the post-war society and that society's progression of moving forward from the tragedy of war. The motif that consistently reoccurs throughout the poem evaluates the key issue that is evident in its title - the "aftermath" of war. Sassoon's exposition recounts how although young men are "reprieved" from war and have made their ways back into society, they still are confronted by the "haunted gap" of their minds; his recount therefore suggests that returning soldiers are unable to properly move forward with life, because they still have not yet learned to accept and live with the terror of the past. ...read more.

However, soon after, Sassoon has also taken upon what sounds like the voice of a soldier who has returned from the war, reflecting on the despair and horror of war - the "stench of corpses rotting," the "hopeless rain," the "doomed and haggard faces" of soldiers. This voice explores how alienated and disoriented a soldier would feel being re-integrated back into society right after the war and very powerfully expresses the resentment towards the oblivious and ignorant civilian community who do not try to be understanding of the difficulties a soldier must overcome. Moreover, the two antithetical poetic voices (of the soldiers and of society) create a dramatic divergence that resembles the conflicts between two social groups at the time: one group wants to remember while the other wants to forget. It's criticizing British culture by justifying that what society idealizes or assumes is good is not necessarily good in actuality for an individual. On top of that, the form of the poem also contributes a lot to the message Sassoon is trying to get across as it greatly reflects his sentiments and viewpoints. There is hardly any uniformity in the structure of the stanzas except for the fact that the longer ones are non-italic while the shorter ones are written in italics. ...read more.

At the same time, it is reinforcing Sassoon's appeal "Do you every stop and ask, 'Is it all going to happen again?'" This is an earnest request calling for people to contemplate on the sufferings they have caused instead of choosing the 'easy' way out where they can just forget. This intensifies Sassoon's revolutionary stance against such convention - what Sassoon is trying to convey completely goes against society's expectations and against traditional values, which have placed a lot of importance on indoctrinating people into believing the war has been right. Once again, Sassoon is rejecting the idea of forgetting. Once again, he is declaring that need to remember and to accept. "Aftermath" is a powerful and thought-provoking appeal to the post-war society not to submit to the repressive government at the time. Sassoon is an iconic figure who is, on behalf of the community of soldiers who have returned from war, standing up against the uncaring government who are relentlessly indoctrinating its subjects into neglecting the memories of war and overlooking the mistake the whole society has made. The poem graphically gives insights into a divergent and segregated society where one social group wants one thing and another group wants another, where the culture is not embracing the community of returning soldiers although claiming to be integrating them back into society. ...read more.