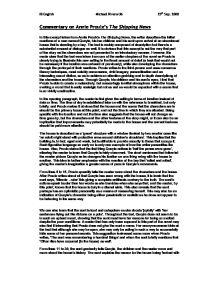 Commentary on Annie Proulx's The Shipping News In this excerpt taken from Annie Proulx's The Shipping News, the writer describes the initial reactions of a man named Quoyle, his two children and his aunt upon arrival at an abandoned house that is standing by a bay. The text is mainly composed of description but there is a substantial amount of dialogue as well. It is obvious that this excerpt is not the very first part of the story as the characters are not presented in an introductory manner. However, it is made clear that the text was taken from one of the earlier chapters of the novel as Proulx is clearly trying to illustrate this new setting in the finest amount of detail (a task that would not be necessary if the location was unheard of previously), while also developing the characters through the portrayal of their reactions. Proulx writes in the third-person and uses numerous literary techniques, most notably consonance, vivid imagery, personification and an interesting use of diction, so as to achieve an attention-grabbing and in depth descriptiong of the characters and the house. Through Quoyle, his children and his aunt's eyes, I find that Proulx is able to create a melancholy, but reassuringly familial atmosphere within the house, evoking a mood that is sadly nostalgic but not as sad as would be expected with a scene that is so vividly unattractive. ...read more.

Her anonymousness hints at the fact that although she may be open, she may only be acting in such a way to successfully hide some of her personal secrets. This suggestion is stressed some more when Proulx writes, 'The aunt was remembering a hundred things' and when the aunt briefly mentions that 'Other rites have occurred [in the house] as well'. From lines 11 to 38, the aunt gradually tells Quoyle, the children and the reader more and more about the house's history. The aunt explains the reason for the house being 'lashed with cable to iron rings set in the rock'. The noise made by the wind blowing through the cables is described to be like 'a moaning'. The fact that the cables are there lest the house will rock back and forth, but are 'bristled with broken wires' too demonstrates the sheer unpleasantness of such a residence. Also relating to sound in lines 6 to 9, the exceedingly repetitive sounds created by the letter 'l' in the words, 'all', 'floors', 'fallen', 'cellar', 'laughed', 'likely', 'joyfully', 'lashed' and 'cable' create a cacophonous effect which is paralleled in the poor condition of the house. The nails in the front door are rusted, and the wood of the door is corroded, but Quoyle is not able to open the door since the wood is hardened by time. ...read more.

Proulx uses this technique of leaving out words that are not necessary for meaning throughout the entire passage in order to illustrate the aunt's straightforward nature. As we near the end of the text, there is reference made to two pictures, each of a dead aunt. The aunt that we know best remembers their deaths and the reader can sense the grief she has felt for them. I have actually read the entire novel some time ago but I do not enjoy the way in which Proulx has written this part of her story, as I find the text at this point to be getting rather tedious as Proulx still continues to put emphasis on the house's gloominess, referring to the holes in the roof, the cracks in the ceiling, the definitively paint-slobbered chair, the slanted floorboards and the bare wood. I would like to think that perhaps the bleakness of the house is meant to have some greater purpose such as to worsen our impression of it so that improvements later on in the story will be more apparent, or perhaps Proulx describes the house so extensively to reflect upon how one of the characters actually see the house. Nonetheless, there were many things to look for meaning in, but I will not be reading this novel again any time soon. ?? ?? ?? ?? IB English Michael Rivera U6 25th Sep. 2008 ...read more.