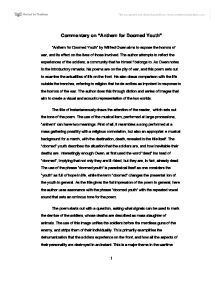 Commentary on "Anthem for Doomed Youth" "Anthem for Doomed Youth" by Wilfred Owen aims to expose the horrors of war, and its effect on the lives of those involved. The author attempts to reflect the experiences of the soldiers, a community that he himself belongs to. As Owen notes in the introductory remarks, his poems are on the pity of war, and this poem sets out to examine the actualities of life on the front. He also draws comparison with the life outside the trenches, referring to religion that he describes as impotent in response to the horrors of the war. The author does this through diction and series of images that aim to create a visual and acoustic representation of the two worlds. The title of instantaneously draws the attention of the reader, which sets out the tone of the poem. The use of the musical item, performed at large processions, "anthem" can have two meanings. First of all, it resembles a song performed at a mass gathering possibly with a religious connotation, but also an appropriate musical background for a march, with the destination, death, revealed in the title itself. The "doomed" youth describes the situation that the soldiers are, and how inevitable their deaths are. Interestingly enough Owen, at first used the word "dead" instead of "doomed", implying that not only they are ill-fated, but they are, in fact, already dead. ...read more.

Here the author reveals the answer to his initial question, suggesting that the sound of the harsh and repetitive sounds of the bullets will accompany them to their death. The first mention of the impotence of religion in matters of the front and soldiers life is exemplified with the representation of the rapid rattle of the bullets that "patter out their [soldier's] hasty orisons". Therefore, this suggests that the bullets, in their usual manner will utter their rushed prayers, not allowing them to confess their sins before death, and this above all is vivid reference to life away from the front. Therefore, the original question is answered in a manner that whatever the signal of death might be, it will be in the hands of the merciless bullets. With the full stop at the end of the first lines, the author presents another comparison, where the emphasis is initially put on the things that the soldiers do not have, or are distant from, using the triple negation of "no", "no" and "nor". The stress is put on the things that exist away from the front, perhaps in a peaceful ceremony, although interestingly enough, Owen displays almost a critical view of the general picture, calling the ceremonies a "mockery". This might have been done to show that religion or Gods, have nothing to do with, or are inefficient in doing something to prevent the deaths of thousands of men. ...read more.

The final line of the poem an alliteration using the sound "d", accompanies the drawing dusk over the battlefield where soldiers lie, and the drawing down of blinds in the houses where they are mourned, and this appears to be a vivid comparison between the two worlds. The poem employs the traditional structure of an Italian sonnet with an octave and a sestet, while a rhyming scheme close to a traditional English sonnet is used. The octave is dominated by the sounds of the battle, with a shift of focus on images and sights in the sestet, which are engulfed in silence and grief. This structure allows efficient transition from aggressive tone of the octave to a milder approach in the last six lines. The couplet, introduced at the end of the sonnet, is used to sum up the life and deaths of the soldiers. The poem presents two worlds with characteristic images and sounds, and further develops these using the octave and the sestet. The images and sounds described aid to form a visual and acoustic image of the battlefield, during and after combat, as well as the mourning processions back home, described as though in fantasy. The author attempts to show the impact of the war on the lives of those who take part in it, and allows the reader to see the battle scenes through their eyes. ?? ?? ?? ?? 1 ...read more.