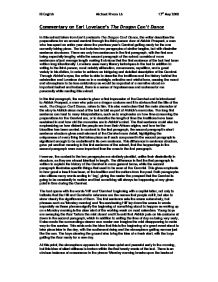 Commentary on Earl Lovelace's The Dragon Can't Dance In this extract taken from Earl Lovelace's The Dragon Can't Dance, the writer describes the preparations for an annual carnival through the third-person view of Aldrick Prospect, a man who has spent an entire year since the previous year's Carnival getting ready for the one currently taking place. The text includes two paragraphs of similar lengths, but with dissimilar sentence structures. There are only two sentences in the first paragraph, with the first one being especially lengthy, while the second paragraph of the extract consists of more sentences of just average length making it obvious that the first sentence of the text had been written long intentionally. Lovelace uses many literary techniques in the text in addition to writing in the third-person, most notably alliteration, consonance, repetition, and a great variety in his diction, in order to achieve an intriguing and detailed description of the Carnival. Through Aldrick's eyes, the writer is able to describe the traditions and the history behind the celebration and Lovelace does so in a nostalgic, reflective and wistful tone, causing the mood and atmosphere to be less celebratory as would be expected of a narrative about an important festival and instead, there is a sense of hopelessness and sadness for me personally while reading this extract. In the first paragraph, the reader is given a first impression of the Carnival and is introduced to Aldrick Prospect, a ...read more.

The culture has been lost, as well as their affirmation of warriorhood and femininity. This list, ending in the mention of a pre-existing 'link' between the villagers and their ancestors, demonstrates how much depth there is in the Carnival's tradition, and here, Lovelace makes the immensity of the loss extremely apparent. In the literal sense, a reader can speculate on the plot to come, namely by expecting the character to struggle to regain the missing strength, femininity and culture. Lovelace introduces a character finally in mid-sentence, Aldrick Prospect who is putting on his dragon costume, and the sounds created by the letters 'b' and 'm' in the words 'the memory burning in his blood', plus the repetition of the phrase, 'Carnival Monday morning', brings the reader back to the beginning of the text so as to remind the reader of the setting made up previously and ensure the reader's thought does not stray too far away after reading the description of the history. Going from the past to the present so quickly differs from the slow, gradual train of thought going from the present back in time to the past. This further illustrates the huge loss of history, and how all of the old customs have been lost so abruptly and unknowingly in just 'three hundred odd years'. In Aldrick Prospect's stream of consciousness, the warriorhood in the people of this Hill had not yet died in them, which contrasts the earlier implication that it had probably died already and this provides a slight sense of hope. ...read more.

Lovelace repeats the word 'But' in his last sentence and his last sentence appears to be Aldrick's last thought before he heads out into the open in his dragon costume. It stresses the unimportance of all that he has thought about since he first put on his costume; because the worst thing that has occurred to him in this final moment is that he 'didn't believe in the dragon any more'. To me, the text did not seem like it was about the magnificence of the Carnival at all, but the importance of the old traditions, full of energy and ideas of rebellion. After reading it a few times now, the sounds I hear and the images I see are hardly celebratory or colourful, but are gloomy and dim. However, the artistry of the work was pleasant to read as I have found a vast number of interesting uses of literary techniques, especially with those associated with sound because creating an atmosphere by simply using the sound of different words is a technique I find enjoyable to pay close attention to and to find meaning in. The impact this text has is stimulating and I believe I would enjoy the whole novel if I get the chance to read it in future. ?? ?? ?? ?? IB English Michael Rivera L6 13th May 2008 ...read more.