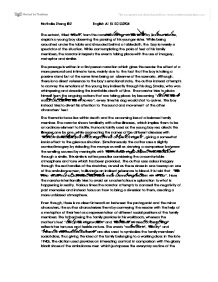 The extract, titled "Feet", from the novel Reading in the Dark by Seamus Deane, depicts a young boy observing the passing of his younger sister. While being crouched under the table and shrouded behind a tablecloth, the boy is merely a spectator of the situation. While contemplating the pairs of feet of his family members, the narrator interprets the events taking place with the use of imagery, metaphor and similes. The passage is written in a first person narration which gives the reader the effect of a more personal and intimate tone, mainly due to the fact that the boy is taking a passive stand but at the same time being an observer of the scenario. Although, there is no direct reference to the boy's emotional state, the author instead attempts to convey the emotions of the young boy indirectly through his dog, Smoky, who was whimpering and dreading the inevitable death of Una. ...read more.

This simile is rather peculiar considering the uncomfortable atmosphere and tone which has been provided. The author uses colour imagery through the red handles of the stretcher, as well as the redness in one toecap on one of the ambulance men, to illustrate an indirect reference to blood. It is told that "the lino itself was so polished that there were answering redness in it too". Here the narrator intentionally tries to avoid an unostentatious explanation to what is happening in reality. Various times the narrator attempts to conceal the negativity of past memories and instead focus on how to bring a diversion to them, creating a more unbiased atmosphere. Even though, there is no direct interaction between the protagonist and the minor characters, the author characterizes them by conveying the reader with the help of a metaphor of their feet as a representation of different social positions of the family members. ...read more.

Throughout the last paragraph, an unpleasant ambience is left by leaving the boy neglected from his family and left alone in the empty room. In the end the narrator seems to be able to grasp the certainty of his sister's oncoming death, and once again attempts to divert himself from the dismal and instead replaces it with a simulated naivety while focusing on keeping a fond memory of his sister smiling in heaven. Thus, in conclusion, Deane implies how the narrator emphasizes with the dire situation, but instead of direct involvement - which the narrator is struggling with to conceal - he uses metaphors, similes and imageries to project what the significance of Una's death is to the narrator as well as the family members. The author effectively makes the reader share the narrator's observation, but without a grand exposure to what the text is trying to convey. ?? ?? ?? ?? Nathalie Zheng IB2 English A1 SL 20100904 ...read more.