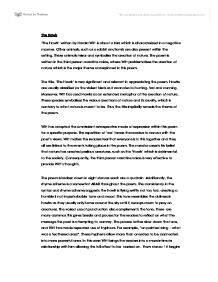 The Hawk 'The Hawk' written by Harold Witt is about a bird which is characterised in a negative manner. Other animals, such as a rabbit and lamb are also present within the setting. These animals mirror and symbolise the creation of nature. The poem is written in the third person narrative voice, where Witt problematises the creation of nature which is the major theme underpinned in this poem. The title, 'The Hawk' is very significant and relevant in appreciating the poem. Hawks are usually classified as the violent birds as it connotes to hunting, fast and cunning. Moreover, Witt has used Hawks as an extended metaphor of the creation of nature. These species symbolises the vicious creations of nature and its cruelty, which is contrary to what nature is meant to be. Thus the title implicitly reveals the theme of the poem. Witt has adopted the omniscient retrospective mode of expression within this poem for a specific purpose. The repetition of 'we' forces the readers to concur with the poet's views. Witt makes the readers feel that everyone is in this together and they all are linked to the events taking place in the poem. ...read more.

Moreover the fact that it is called a "thing" no entity or name is given to it, again undermining the importance of the Hawk. Witt overtly depicts the bird as a murderer, "bent tense to kill". This sheds criticising light on the dangerous Hawk. Witt also makes references to biblical allusions. "feathered cross". The "cross" can be alluding to Jesus Christ and the fact that it is "feathered" giving it the qualities of the cunning Hawk, Witt imperceptibly denigrates religion in a way. As he cannot understand how Jesus could have created a creature like the Hawk. Surprisingly the Hawk has been given powerful facets such as, "cruising". This imagery articulated the Hawk controls the skies and overlooks the natural world by looking down to it. In the third stanza it states that the ferocious animal will "tear" anything. Interestingly till now Witt has described the Hawk pessimistically through his actions and violent imagery. However the effect of this is to contrast it to the "lamb" and "rabbit" which are present in the third stanza. The "lamb" is an archetypal symbol of Christ. ...read more.

In the penultimate stanza, construes that nothing is safe from the Hawk. "So we though as we watched the hawk swoop down" This illuminates that the narrator is also helpless knowing that "nothing is safe" he is only able to "watch" as nobody can fight against nature. However in the final stanza Witt comes to a consensus regarding the issue of creations of nature. "hawk flapped up again - tenderness hadn't been caught. It blended in." The ending shows how even though the Hawk came down, the "tenderness" and innocent hadn't been lost. In fact the innocence and cunningness both "blended". Witt agrees that nature consists of both positive and negative elements and that the both together form the natural world. This poem constantly challenges the creation of nature, i.e. animals. The theme is explored by considering the duality in nature and how there are two sides. There is the deleterious side of nature which is represented by the Hawk and there is the peaceful side of nature which is represented by the Lambs and Rabbits. Thus the poet remarks the dicotiny in the natural world. Witt challenged the readers to question the establishment and come to their own conclusions about the natural world. ...read more.