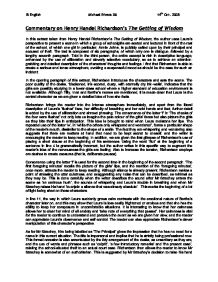 Commentary on Henry Handel Richardson(TM)s The Getting of Wisdom

Commentary on Henry Handel Richardson's The Getting of Wisdom In this extract taken from Henry Handel Richardson's The Getting of Wisdom, the author uses Laura's perspective to present a scene in which a group of schoolgirls are seated and lectured in front of the rest of the school, of which one girl in particular, Annie Johns, is publicly called upon by their principal and accused of theft. The text is composed of six paragraphs, of which only one is dialogue, followed by a lengthy seventh paragraph. Told in the third-person, the entire excerpt is rich in descriptive language, enhanced by the use of alliteration and cleverly selective vocabulary, so as to achieve an attention-grabbing and detailed description of the characters' thoughts and feelings. I find that Richardson is able to create a serious and tense atmosphere, evoking a suspenseful mood as should be the case for such an incident. In the opening paragraph of this extract, Richardson introduces the characters and sets the scene. The poor quality of the desks, 'blackened, ink-scored, dusty, with eternally dry ink-wells', indicates that the girls are possibly studying in a lower-class school where a higher standard of education environment is not available. ...read more.

Her calmness is vital for the reader to continue to understand and perceive the event as we are given her view, and the reader can appreciate Laura's observance and self-control. The reader can also appreciate Richardson's clever manipulation of this character's perspective. As for Mr Strachey, him being labelled as 'The Principal' gives the impression that he has no need for a name in this current situation. The title is impersonal and implies that he is strictly being professional now. This formal occasion is also accentuated by the tidy arrangement of the desks, as unsanitary as they are, and the use of words and phrases such as 'culprit', 'a few introductory remarks' and 'the present case', relating the school-situated theft to an actual court case. Richardson then allows the reader to know Mr Strachey is somewhat of an authoritarian. This is suggested by Mr Strachey's decision to raise his hand for silence that the writer vividly describes as 'already absolute' and his way of ordering Annie Johns to stand up. '"Will Miss Johns stand up!"' is a question in strict linguistic terms, but the exclamation mark indicates that it is a command and not an inquiry. ...read more.

Laura 'could imagine, too, with a shiver', to what extent the details of this crime could be revealed. When Richardson describes the lolly-shop as having 'octopus arms', and tells us that Laura is considering 'if every one else agreed with [Mr Strachey]', it indicates that Laura is imaginative, bright and deductive in her reasoning as she puts her observation skills in good use, and all of this suggests that her aptitude is possibly brought about by some difference between her attitude to education and the other girls' approach. This extract was interesting to analyse and to see how a writer can use a character so captivatingly to direct us to what is significant in the actual plot. This includes the characterisations of Bertha, Annie Johns and Mr Strachey, as well as Laura, and the way in which Richardson applies alliteration to this text to create visual impressions. I guess I could say that I was fascinated by Richardson's style as he made the scene and the characters all live vividly before me. I hung on his diction, appreciated his style and the clever way in which he worked up his climaxes. As grammatically incorrect as it is in saying this, I feel I have certainly been 'getting' some wisdom. IB English Michael Rivera U6 14th Oct. 2008 ...read more.