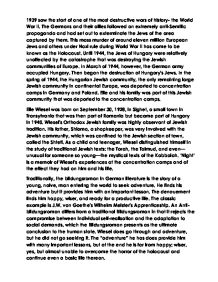 1939 saw the start of one of the most destructive wars of history- the World War II. The Germans and their allies followed an extremely anti-Semitic propaganda and had set out to exterminate the Jews of the area captured by them. This mass murder of around eleven million European Jews and others under Nazi rule during World War II has come to be known as the Holocaust. Until 1944, the Jews of Hungary were relatively unaffected by the catastrophe that was destroying the Jewish communities of Europe. In March of 1944, however, the German army occupied Hungary. Then began the destruction of Hungary's Jews. In the spring of 1944, the Hungarian Jewish community, the only remaining large Jewish community in continental Europe, was deported to concentration camps in Germany and Poland. Elie and his family was part of this Jewish community that was deported to the concentration camps. Elie Wiesel was born on September 30, 1928, in Sighet, a small town in Transylvania that was then part of Romania but became part of Hungary in 1940. Wiesel's Orthodox Jewish family was highly observant of Jewish tradition. His father, Shlomo, a shopkeeper, was very involved with the Jewish community, which was confined to the Jewish section of town, called the Shtetl. ...read more.

Eliezer's struggle with faith is, for the most part, a struggle of questions. He continually asks where God has gone and questions how such evil could exist in the world. Moishe's statement tells us that these moments do not reflect Elie's loss of faith; instead they demonstrate his ongoing spiritual commitment. But we also see that at the lowest points of Eliezer's faith-particularly when he sees the youth hung in Buna-he is full of answers, not questions. At these moments, he has indeed lost the spirit of faith he learned from Moishe, and is truly faithless. In other words, questioning God is fundamental to the idea of faith in God. The Holocaust forces Eliezer to ask horrible questions about the nature of good and evil and about whether God exists. But the very fact that he asks these questions reflects his commitment to God. Only rarely does Eliezer interrupt his continuous narrative stream to reminisce about the ways that the Holocaust continued to affect his life after it ended. Here, however, Eliezer looks back on his first night in Birkenau and describes not only what he felt at the time but also the lasting impact of that night: "Never shall I forget that night . ...read more.

While it is true that Eliezer, after the Holocaust, thinks of himself as another person, someone utterly changed from the innocent boy who left Sighet, that person, that "corpse," undergoes a metamorphosis. Night does not end with optimism and a rosy message, but neither does it end as bleakly as many believe. What we are left with are questions-about God's and man's capacity for evil-but no true answers. Night does not try to answer these questions; perhaps this lack of answers is one of the reasons that the story ends with the liberation of Buchenwald. The moral responsibility for remembering the Holocaust, and for confronting these difficult moral and theological questions, falls directly upon us, the readers. 'Night' focuses on one specific story-Eliezer's-to give the reader a detailed, personal account of suffering in the Holocaust. From a more traditional perspective, the ending feels incomplete. A historian or biographer would not be satisfied with this conclusion and would want to know what happened afterward-how Eliezer reunited with his family, what he did after the war, and so on. Night deliberately manipulates narrative conventions, ending where it does because it is meant to offer an intimate portrayal of Eliezer's wartime experiences, particularly of the cruelty and suffering he experiences in the concentration camps. Other material would distract from the intensity of the experience Wiesel is trying to convey. ...read more.