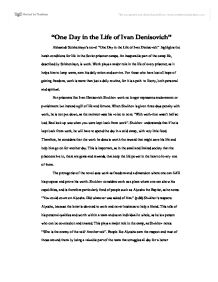 Commentary on One Day in the Life of Ivan Denisovich

"One Day in the Life of Ivan Denisovich" Aleksandr Solzhenitsyn's novel "One Day in the Life of Ivan Denisovich" highlights the harsh conditions for life in the Soviet prisoner camps. An inseparable part of the camp life, described by Solzhenitsyn, is work. Work plays a major role in the life of every prisoner, as it helps him to keep warm, earn his daily ration and survive. For those who have lost all hope of gaining freedom, work is more than just a daily routine, for it is a path to liberty, both personal and spiritual. For prisoners like Ivan Denisovich Shukhov work no longer represents enslavement or punishment but instead a gift of life and fortune. When Shukhov is given three days penalty with work, he is not put down, as the narrator uses his voice to note: "With work-that wasn't half so bad. Real lock up was when you were kept back from work". ...read more.

This plays a major role in the camp, as Shukhov notes: "Who is the enemy of the zek? Another zek". People like Alyosha earn the respect and trust of those around them by being a valuable part of the team that struggles all day for a better treatment. Therefore, work not provides the prisoners with food and warmth, but also allows them to differ from hundreds of other prisoners, assessed by their abilities and qualities. Shukhov shows that one is responsible for taking control over his life, and doing his best at it. When the work time arrives, a prisoner can work not only for the authorities, but also for himself by achieving the goals set for the day, and showing his worth in life. Shukhov himself has a tendency to perfect his work, as he notes: "Hasty work is scamped work" (p. 89). This shows how devoted Shukhov is to the one of the few goals that he sets for himself, taking the responsibility for a part of his everyday routine. ...read more.

Completion of all the objectives set out at the beginning of the day means that the team gets extra rations and better treatment, which is what every prisoner looks forward to, and is ready to work hard to deserve. Therefore, with no access to all the futile aims in life outside the prison, the zek's only goal in life is to survive, live a day longer, and get to see the next one, not much different from the previous, start. The author portrays work as having the capacity of saving the prisoners life, and also freeing him from the constant pressure of the authorities present in the camp. Work also allows a prisoner to display his abilities and prove his worth and qualities as an individual. This contributes to his survival, and also affects his relationship with other convicts. It keeps the prisoner warm in the long hours of hard work and rewards him with a daily ration of food, enough for survival. Work is able to turn into prisoner's best friend and his only savior in a place where ones thoughts are not free, just like his individuality. ?? ?? ?? ?? ...read more.