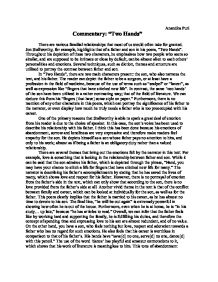 Anandita Puri Commentary: "Two Hands" There are various familial relationships that most of us would often take for granted. Jon Stallworthy, for example, highlights that of a father and son in his poem, "Two Hands". Throughout his depiction of these two characters, he emphasizes how two people who seem so similar, and are supposed to be intimate or close by default, can be almost alien to each others' personalities and emotions. Several techniques, such as diction, themes and structure are utilized to portray the contrast between father and son. In "Two Hands", there are two main characters present: the son, who also narrates the text, and his father. The reader can depict the father to be a surgeon, or at least have a profession in the field of medicine, because of the use of terms such as "scalpel" or "lancet", as well as expression like "fingers that have stitched new life". In contrast, the same 'two hands' of the son have been utilized in a rather contrasting way; that of the field of literature. We can deduce this from his "fingers [that have] some style on paper." Furthermore, there is no mention of any other characters in this poem, which can portray the significance of his father to the narrator, or even display how much he truly needs a father who is too preoccupied with his career. ...read more.

This tone of abandonment informs the readers of the son's feelings of insecurity and inferiority in front of his father, while all alone he tries only to be close to him. In a poem, the structure and topography play an extremely crucial role in the way a readers depicts the writing. Stallworthy has laid out "Two hands" in one long stanza, with a great deal of enjambment as well. This implies run-on thoughts, as well as providing a tone of overall reminiscence to the text. The lack of a concise structure gives the effect of thoughts being haphazardly thrown onto paper, in whichever order they may occur. Moreover, this style makes it seem like a story is being told. This is useful in depicting the character of the narrator, as well as provides the impression that he is writing a biography on his father. Once again, the line, "Hand, you may have your chance to stitch a life for fingers that have stitched new life for many," reveals the narrator's intentions. Where 'stitching a life' means writing a book to the son, to the father the very same phrase has a more literal meaning; that of saving a life, perhaps in surgery. ...read more.

These two models illustrate the father as extremely hard working and skilled in his field of work. In contrast, an expression like "The phone has sobbed itself to sleep" highlights an extremely striking image of a young boy trying to cry himself to bed. It provides a saddening effect on the reader, and also emphasizes the lack of emotion in the father. It is almost as if the situation is so depressing that even inanimate objects are crying out in sheer desperation. Finally, the son's confusion and uncertainty is represented through the symbol of his hands, "whose indecisions keep [him] cursing nightly; fingers with some style on paper, elsewhere none." He is perplexed by his current situation where his own hands seem so worthless in comparison to that of his fathers', which leaves him in an unknowing state. In general, Stallworthy utilizes various poetic devices in order to provide the simple of contrast between the father and son. The "Two Hands" signify that of the sons', which seem so insignificant relative to his fathers', who have saved so many lives through what can be called a graceful art. His inferiority, loneliness and helplessness are highlighted throughout the text, through the symbol of the two hands. ...read more.