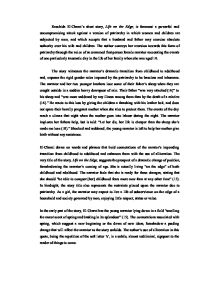 Raschida El-Charni's short story, Life on the Edge, is foremost a powerful and uncompromising attack against a version of patriarchy in which women and children are subjected by men, and which accepts that a husband and father may exercise absolute authority over his wife and children. The author conveys her aversion towards this form of patriarchy through the voice of an unnamed first-person female narrator recounting the events of one particularly traumatic day in the life of her family when she was aged 10. The story witnesses the narrator's dramatic transition from childhood to adulthood and, exposes the rigid gender roles imposed by the patriarchy to be baseless and inhumane. The narrator and her two younger brothers lose some of their father's sheep when they are caught outside in a sudden heavy downpour of rain. Their father "was very attached (16)" to his sheep and "was more saddened by any illness among them than by the death of a relative (16)." He reacts to this loss by giving the children a thrashing with his leather belt, and does not spare their heavily pregnant mother when she tries to protect them. The events of the day reach a climax that night when the mother goes into labour during the night. ...read more.

yet this is juxtaposed against their mother's warning. There is also a marked difference in the attitudes of the narrator, and that of her two brothers towards the journey. For the narrator, the journey to there hereafter has symbolical significance, something it does not have for her brothers. Although Ammar and al-Amin, the narrator's two brothers, are also physically abused by their father, they are male, and as such will be empowered once they come of age. This could either be absolute power over their wife and children, a direct replication of their father, or power within the isolated society. The gender of the narrator is not specified, and thus prevents the reader from establishing any gender bias towards the character. It is the author's intention that due to the 'masculine' traits exhibited by the narrator in establishing this journey to the hereafter, automatically assume that she is male. It is with this assumption that el-Charni undermines the belief central to the workings of a patriarchal society which is that only males are both worthy and capable of holding a position of power and influence within society. The 'masculine' traits possessed by the narrator are those which, in a patriarchy, should theoretically be exhibited by males only. ...read more.

She is referred to only once in the story by her mother as "my daughter (18)" which is also the phrase that identifies the narrator as a female character. Although this emotionally distances the reader from the narrator, it allows her character to be generalised. The reader can then relate the narrator's experiences, as well as el-Charni's message of gender equality, to their own personal experiences and society. By doing this, el-Charni is encouraging the reader to re-evaluate their views on the capabilities of the female gender, integrating her own perceptions into their personal mindset. Raschida el-Charni challenged the rigid gender roles imposed by a patriarchy in the short story Life on the Edge. Through the unnamed first-person female narrator and her transition into adulthood, el-Charni conveys the dehumanisation of women in a patriarchy by the men surrounding them. In the family, is accepted that the narrator's father may value the welfare of his sheep over that of his wife and children. The narrator's family, the only other characters in the story, do not have individual roles and are developed by el-Charni to expose the inhumane and base gender roles within a patriarchy. The physical setting of the story is used to represent the constraints placed upon females in the society, with the high mountains bordering the community symbolically preventing the narrator from developing into an adult who holds respect, status or value. ...read more.