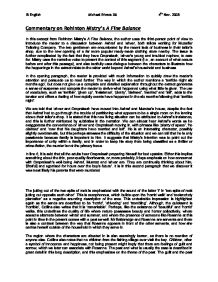 Commentary on Rohinton Mistry's A Fine Balance In this excerpt from Rohinton Mistry's A Fine Balance, the author uses the third-person point of view to introduce the reader to a discussion between Ashraf and Ishvar, both tailors working for Muzaffar Tailoring Company. The two gentlemen are encumbered by the recent lack of business in their tailor's shop, due to the new opening of a far more popular ready-made clothing store nearby. The issue is further complicated by the fact that they have Omprakash, Ishvar's young and troubled nephew, to care for. Mistry uses the narrative voice to present the context of this segment (i.e., an account of what occurs before and after this passage), and also tactfully uses dialogue between the characters to illustrate how the happenings in the extract relate to the wider world beyond Ashraf's household and business. In the opening paragraph, the reader is provided with much information to quickly draw the reader's attention and persuade us to read further. The way in which the author mentions a 'terrible night six months ago', but does not give us a complete and detailed explanation throughout the extract generates a sense of suspense and compels the reader to derive what happened using what little is given. ...read more.

Children, often a symbol of innocence and happiness, not being present might imply that there are feelings of guilt and sorrow, which we later can associate with Rosanna. The past and what is usually the case is described in great detail in this long description, and this emphasizes on the theme of the past. The guilt and the past are things that consume Rosanna and this is mirrored in the environment, with quicksand that devours. The currently unknown past of Rosanna is reflected in the mysterious 'unknown depths below' and the concealed nature of said past is reflected in the tide that 'covers the sand in silence'. The structuring of the short first and third paragraphs encasing the long second paragraph brings the idea of enclosure to mind again. By mentioning the plantation in line 24, we are brought back to the word used in line 3, and Collins does so to evoke the sad mood again, as opposed to the dramatic mood evoked by the description of the horrid quicksand. The third paragraph is fairly simple in terms of sentence structuring and the entire excerpt, in fact, uses simple vocabulary to suggest maybe that this is a simpler time in the bay's history or perhaps Rosanna or Mr Betteredge's lives. ...read more.

Rosanna, perhaps working as a maid or some sort of a housekeeper, accustomed to keeping things clean, and herself, focused and organized, wipes her face of her tears, and clears her mind of her troubles by focusing on the grease stain on Mr Betteredge's coat, and even exclaiming enthusiastically 'the place shows!' to distract Mr Betteredge from asking again. To me, within this extract, the mood is peaceful for the most part, even with the great abundance of negative diction, and even with Rosanna weeping. I find that this is due to the calm demeanour of the servants and the way in which they have been trained to keep their composure even when there are problems in their lives or in the lives of the people that surround them. Life on the Yorkshire coast does not appear to be perfect, but the way in which Rosanna manages to find enjoyment amongst the horrendousness of the walk and the remoteness of the bay makes it more comforting. The setting gives the commentator much to comment upon, as Collins uses the physical setting to reflect the behaviours and the backgrounds of the characters and the situations that they are in. ?? ?? ?? ?? IB English Michael Rivera U6 4th Nov. 2008 ...read more.