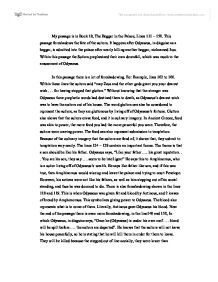 My passage is in Book 18, The Beggar in the Palace, Lines 111 - 150. This passage foreshadows the fate of the suitors. It happens after Odysseus, in disguise as a beggar, is admitted into the palace after nearly killing another beggar, nicknamed Irus. Within this passage the Suitors prophesized their own downfall, which was much to the amusement of Odysseus. In this passage there is a lot of foreshadowing. For Example, lines 102 to 106. Within these lines the suitors said "may Zeus and the other gods grant you your dearest wish . . . for having stopped that glutton." Without knowing that the stranger was Odysseus there prophetic words had destined them to death, as Odysseus's dearest wish was to have the suitors out of his house. ...read more.

The lines 124 - 129 contain an important theme. The theme is that a son should be like his father. Odysseus says, "Like your father . . . his great reputation. . . You are his son, they say . . . seem to be intelligent" He says this to Amphinomus, who is a suitor living off of Odysseus's wealth. He says like father like son, and if this was true, then Amphinomus would wise up and leave the palace and trying to court Penelope. However, his actions were not like his fathers, as well as him stepping out of his social standing, and thus he was doomed to die. There is also foreshadowing shown in the lines 118 and 119. ...read more.

They will be killed because the stepped out of line socially, they were lower than Odysseus, yet they were planning to kill and replace those that were above them in the social ladder. Due to this there was retribution, and they were smitten. As the passage progresses the foreshadowing becomes more and more clear. In the beginning his foreshadowing is very vague like when he says, "let that be a lesson to every man never to live a lawless life but quietly to enjoy what the gods give him", to very clear as in "Blood will be split before he and the suitors are parted". In disguise he gives the suitors a warning that there will be death when they and Odysseus meet. He is also making an oath to himself by saying that he will have revenge on the suitors. ...read more.