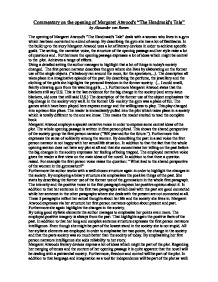 Commentary on the opening of Margaret Atwood's &quot;The Handmaid's Tale&quot;

Commentary on the opening of Margaret Atwood's "The Handmaid's Tale" by Alexander von Ramm The opening of Margaret Atwood's "The Handmaid's Tale" deals with a woman who lives in a gym which has been converted to a kind of camp. By describing the gym she has a lot of flashbacks. In the build up to the story Margaret Atwood uses a lot of literary devices in order to achieve specific goals. The setting, the narrative voice, the structure of the opening passage and her style raise a lot of questions and . Furthermore the opening passage expresses a lot of ideas which might be central to the plot. Achieves a range of effects. Using a detailed setting the author manages to highlight that a lot of things in today's society changed. The first person narrator describes the gym where she lives by elaborating on the former use of the single objects. ...read more.

This makes the reader excited to read the complete book. Margaret Atwood employs a special narrative voice in order to express some central ideas of the plot. The whole opening passage is written in first person plural. This shows the shared perspective of the society group the first person narrator ("WE yearned for the future."). Furthermore this expresses the sense of solidarity among the women. By describing the past in a sad voice the first person narrator is not happy with her actual life situation. In addition to that the fact that the whole opening section does not have any plot at all and that she concentrates her telling on the past before the big changes in the society expresses her feeling of being trapped. The employed narrative voice gives the reader a first view on the main ideas of the novel. In addition to that there a question raised. ...read more.

The employed positive imagery is always from the past. That highlights again the positive facts of the past. In addition to that her long and complex sentence structure expresses the first person narrators intelligence- Even though she might be part of the lowest stand in the society she is not stupid. All her stylistic elements are employed in order to emphasize her two points, the change in the society and that the pasts society was so much better than the society of today. By emphasizing her first person narrators intelligence she adds reliability to her story. Margaret Atwoods literary devices express a lot of ideas which might be part of the plot. Regarding her merging of tenses and the content of her opening passage it is quite apparent that the novel will be dealing with a patriarchal society. Furthermore, freedom and control will be part of the plot. In addition to that language and imagination as a tool for independence will be part of the plot as well. These topics were quite important in the realisatione of the book. ...read more.