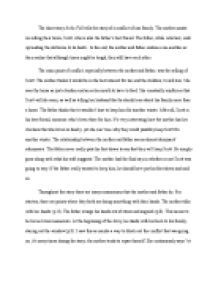 Commentary on the short story &quot;In The Fall&quot;.

﻿The short story In the Fall tells the story of a conflict of one family. The mother insists on selling their horse, Scott, who is also the father?s best friend. The father, while reluctant, ends up leading the old horse to its death. In the end, the mother and father embrace one another as they realize that although times might be tough, they still have each other. The main point of conflict, especially between the mother and father, was the selling of Scott. The mother thinks it would be in the best interest for her and the children, to sell him. She sees the horse as just a burden and an extra mouth to have to feed. ...read more.

The father never really puts his foot down to say that they will keep Scott. He simply goes along with what his wife suggests. The mother had the final say in whether or not Scott was going to stay. If the father really wanted to keep him, he should have put his foot down and said so. Throughout the story there are many mannerisms that the mother and father do. For starters, there are points where they both are doing something with their hands. The mother talks with her hands (p. 8). The father wrings his hands out of stress and anguish (p.8). This seems to be his nervous mannerism. At the beginning of the story, he stands with his back to his family, staring out the window (p.8). ...read more.

I interpreted how her hair was severely pulled back, as a symbol of her wanting things in line and her strict personality. The father, however, is rather passive and obedient. He rarely shares his opinion throughout the story and is fairly quiet. The water, I thought, worked as a symbol of his personality. It was ?roiled, angry, and almost anguished? (p.7). This is similar to his feelings about having to lead his best friend to his death. The mother is more outspoken than he is. Her opinion seems to be the way things go. At the end of the story, she ?lets her hair down?, almost as if she was setting down all her burdens and worries for a minute. When her and her husband embraced, it showed that they knew that sometimes things could be tough. They also knew that they would get through it together. ...read more.