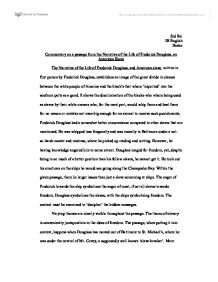 Commentary on the Slave Narrative by Frederick Douglass

Sid Rai IB English Haske Commentary on a passage from the Narrative of the Life of Frederick Douglass, an American Slave The Narrative of the Life of Frederick Douglass, and American slave, written in first person by Frederick Douglass, establishes an image of the great divide in classes between the white people of America and the black's that where 'imported' into the southern parts as a good. It shows the discrimination of the blacks who where being used as slaves by their white owners who, for the most part, would whip them and beat them for no reason or mistake not even big enough for an animal to receive such punishments. Frederick Douglass had a somewhat better circumstance compared to other slaves that are mentioned. He was whipped less frequently and was recently in Baltimore under a not-so-harsh master and mistress, where he picked up reading and writing. However, he having knowledge angered him to some extent. Douglass longed for freedom, yet, despite being in so much of a better position than his fellow slaves, he cannot get it. He took out his emotions on the ships he would see going along the Chesapeake Bay. Within the given passage, there lie larger issues than just a slave screaming at ships. The anger of Frederick towards the ship symbolizes the anger of most, if not all slaves towards freedom. ...read more.

Perhaps the fact that Douglass has tasted some form of freedom when he was in Baltimore may have sparked a need to be free, however, according to this passage, which occurs much after his little spree of 'freedom', he claims that he is still a kid, and will, some day, be free, but until then, he must suffer. Again, Douglass talking in first person doesn't only refer to him, but to the larger black-slaves community. Frederic Douglass seems very elaborate and concise about the use of religion not only in this passage, but throughout the book. An example can be taken when he is angered by the fact that the ships are free, yet he's so close, but he isn't; "You are freedom's swift-winged angels...O God save me...God, deliver me...Is there any God..." (Douglass 106). He sometimes uses polysyndeton to rhetorically compare and contrast the religious hypocrisy within the book. Most slaves were brought up around Christian surroundings, which could be the reason for Douglass to use so many religious allusions. Throughout the book, major themes such as slavery, religion, freedom and racial discrimination keep coming up, with many minor themes that occasionally appear. His organization of themes and events are well thought out as they follow both a chronological order and creates a smooth, gentle effect to the whole reading. ...read more.

There is also anger exhibited within Douglass' tone, with slight jealousy there towards the ships. The use of repeated exclamation marks presents the tone in a flawless manner, for example, "...I am a slave!...bands of iron!...and I am free! Try it? Yes!" (Douglass 106). This also exhibits desperation as he is talking about when he gets free, which gives him an image of a somewhat 'psychotic madman'. He does, at a point, want to simply run away, with no care of getting caught or getting free, however, Douglass manages to control himself in time and regain his usual composure. Douglass is stupefied by work, exhaustion, and Covey's repeated punishments. He loses his spirit, his intellect, his desire to learn, and his natural cheerfulness during his stay at Mr. Covey's. In conclusion, Frederick Douglass uses an array of literary devices to emphasize his determination, desperation and anger, all at the same time. He feels dehumanized and taunted by the fact that ships are free whereas he is stuck in such a life. He vows to run away, at a point with no planning, however, controls himself to a point that he fantasizes about freedom and thinks more clearly. Slavery to him is like a drug. He only takes so much and cracks but the Sunday's off where he would be in a stupor under the shade acted as a 'rehab' to relieve him of some pressure. His use of literary devices in such concise orders brings all his points and his message all together. ...read more.