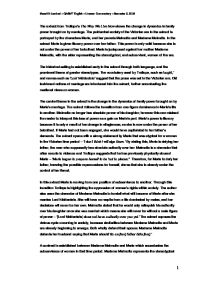 Commentary on Trollope's 'The Way We Live Now'

The extract from Trollope's The Way We Live Now shows the change in dynamics in family power brought on by marriage. The patriarchal society of the Victorian era in the extract is portrayed by the characters Marie, and her parents Melmotte and Madame Melmotte. In the extract Marie is given illusory power over her father. This power is only valid because she is not under the power of her betrothed. Marie is juxtaposed against her mother Madame Melmotte, with the elder representing the stereotypical, and subservient, woman of the era. The historical setting is established early in the extract through both language, and the prominent theme of gender stereotypes. The vocabulary used by Trollope, such as 'ought,' and names such as 'Lord Nidderdale' suggest that the prose was set in the Victorian era. Old fashioned notions of marriage are introduced into the extract, further accentuating the medieval views on women. The central theme in the extract is the change in the dynamics of family power brought on by Marie's marriage. ...read more.

In this extract Marie is moving from one position of subservience to another. Through this transition Trollope is highlighting the oppression of women's rights within society. The author also uses the character of Madame Melmotte to foretell what will become of Marie after she marries Lord Nidderdale. She will have no respite from a life dominated by males, and her decisions will never be her own. Melmotte stated that he would only relinquish his authority over his daughter once she was married which means she will never be without a male figure of power - '[Lord Nidderdale] does not have authority over you yet.' The extract exposes the vicious cycle occurring in society, because similarities between Madame Melmotte and Marie are already beginning to emerge. Both wholly defend their spouse. Madame Melmotte defends her husband saying that Marie should 'do as [her] father bids [her].' A contrast is established between Madame Melmotte and Marie which accentuates the subservience of women in that time period. ...read more.

shake the wickedness ... and ingratitude out of her.' Following the revelation that Melmotte desired to resort to violence, the diction in the extract changed dramatically. The phrases in Melmotte's dialogue become shorter in length, which showed his patience approaching its limit. The phrases were also dramatic and designed to instil guilt into Marie - '[Marie] does not care who is ruined.' This passage shows that Melmotte has not accepted the transferral of power over Marie. This extract from The Way We Live Now exposes the powerlessness of women in Victorian society. Trollope creates an illusion of power in a central female character, Marie. It becomes evident that this power is not Marie's, but only an extension of that belonging to her betrothed. The character Madame Melmotte is an embodiment of the stereotypical Victorian wife. She also provides a template for Marie's future, which is that of a subservient wife. This extract provides an insight into the differences family dynamics in the Victorian era and the transferral of power in a marriage from a father to a husband. ?? ?? ?? ?? Meredith Lambert - QASMT English - Unseen Commentary - Semester 2, 2008 1 ...read more.