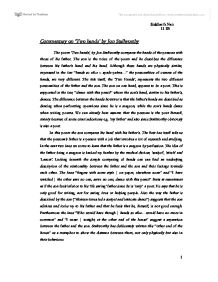 Commentary on 'Two hands' by Jon Stallworthy The poem 'Two hands', by Jon Stallworthy compares the hands of the persona with those of his father. The son is the voice of the poem and he describes the difference between his father's hand and his hand. Although these hands are physically similar, expressed in the line "hands so alike - spade palms..." the personalities of owners of the hands, are very different. The title itself, the 'Two Hands', represents the two different personalities of the father and the son. The son on one hand, appears to be a poet. This is supported in the line; "dance with this pencil" where the son's hand, similar to his father's, dances. The difference between the hands however is that the father's hands are described as dancing when performing operations since he is a surgeon, while the son's hands dance when writing poems. We can already here assume that the persona is the poet himself, mainly because of some clear indications e.g. ...read more.

Stallworthy makes use of several different literary techniques in order to emphasize certain parts of his poem. An example of this can be found in the line "that thirteen times" where the alliteration of the t's accentuates these words and gives the line a somewhat 'chatty' feeling which contributes to the colloquial manner in which this story is told. The same technique is used in the 1st and 2nd lines to draw together the words "study, sits and stiffly" and in order to, perhaps use the word 'stiffly' sitting as well as the way 'the pen nods'. We also see that the persona knows that now he would be under the influence of his father, and feels quite frustrated at being under someone's mercy. In his poem, Stallworthy frequently uses enjambment which then is followed by a caesura. An example of this can be found in the lines 9 and 15 where his use of the caesura allows the line's sense to be clear and it also influences the rhythm as to give it a feeling of natural speech. ...read more.

"The pencil drops: he will be out again." He compares his hand to his father's to show that his hand is immature and not that capable of doing work as fast as his father does. As he is inexperienced in life and is not as skilled as his father in the job of a surgeon he says that his hand moves 'slow' as compared to this father's. Over here he just describes his father's efficiency in work whereas he is under the supervision of his father. To conclude, I feel that it is seen how Stallworthy has captured the mood of an inadequate son, suppressed by his father's 'superiority' by using several techniques. The regular rhyme which occasionally is shattered in co-operation with the diction and the various literary techniques, contributes to this atmosphere of insecurity. Stallworthy manages to create something we all can recognize; the feeling of being insufficient, not good enough, and not able to reach the expectations of our authority figures. Siddharth Nair 11 IB 1 ...read more.