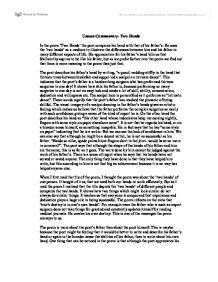 Unseen Commentary- Two Hands In the poem 'Two Hands' the poet compares his hand with that of his father's. He uses the 'two hands' as a medium to illustrate the differences between him and his father in many different aspects of life. His appreciation for his father's hand tells us that Stallworthy aspires to be like his father, but as we probe further into the poem we find out that there is more meaning to the poem than just that. The poet describes his father's hand by writing, "a pencil nodding stiffly in the hand that thirteen times between breakfast and supper led a scalpel an intricate dance". This indicates that the poet's father is a hardworking surgeon who has performed thirteen surgeries in one day! It shows how able his father is, because performing so many surgeries in one day is not an easy task and needs a lot of skill, ability, concentration, dedication and willingness etc. ...read more.

I thought of it as, that we need both our hands to work efficiently. But as I read the poem I realized that the title depicts the 'two hands' of different people and compares the two hands. It shows how two things which might look similar do not always do similar things. It teaches us that everyone is unique and that experience and dedication plays a huge role in being successful. The poem reflects on the view that "one's destiny is in one's own hands". For example even the father who is such an expert surgeon does not take things for granted and constantly updates himself by reading medical journals. He creates his own destiny. This is one of the messages the poem conveys to us. The poem is more about the poet's father than about the poet himself. This is maybe because the poet might be feeling that it would be better to write and describe his father's hand or again in the broader sense the abilities of his father, than to write about his own hand. ...read more.

The phone "sobbed itself to sleep" by waiting to be used but the father is so dedicated and occupied with what he is doing that he doesn't have the time to use the phone. The idea of the scalpel dancing intricately is already explained before and again highlights the exceptional qualities of the father. The reason why the poet has personified these objects is because he wanted to convey to the reader how good his father is in his work. The poem has no stanzas which shows that the poet has used the technique of enjambment. This is maybe because the poet's thoughts might just be flowing and he must be simply using his "hand" to jot down whatever he thinks. Or maybe he must be trying to right fast like how his father's hand works. The contrast in the 'two hands' of the father and son shows how two things cannot be the same even if they look the same. It tells us how contrasts can lead to insecurity and self-doubting. It even tells us how contrasts make us appreciate people, get inspired by them and aspire to be like them. Veer Jhamtani IBD Year 11 ...read more.