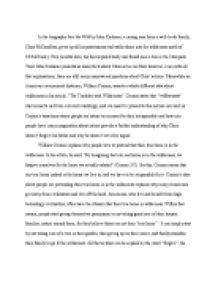 Commentary on William Cronon's article The Troubles with Wilderness and the biography &quot;Into the Wild&quot; by John Krakauer.

﻿In the biography Into the Wild by John Krakauer, a young man from a well-to-do family, Chris McCandless, gives up all his possessions and walks alone into the wilderness north of Mt.McKinley. Four months later, his decomposed body was found near a bus in the Stampede Trail. John Krakauer presents as many facts about Chris as he can find; however, even with all that explanations, there are still many unanswered questions about Chris? actions. Meanwhile an American environment historian, William Cronon, asserts a whole different idea about wilderness in his article, ?The Troubles with Wilderness?. Cronon states that "wilderness" disconnects us from our surroundings, and we need to preserve the nature around us. Cronon?s assertions about people see nature as excuses for their irresponsible and how city people have crazy imagination about nature provide a further understanding of why Chris doesn?t forgive his father and why he doesn?t set a fire signal. William Cronon explains why people love to pretend that their true home is in the wilderness. In his article, he said, ?By imagining that our real home is in the wilderness, we forgive ourselves for the home we actually inhabit? (Cronon 355). By this, Cronon means that our true home indeed is the house we live in, and we have to be responsible for it. ...read more.

He was also able to forgive, or overlook, the shortcomings of his literary heroes: Jack London was a notorious drunk; Tolstoy, despite his famous advocacy of celibacy, had been an enthusiastic sexual adventurer as young man and went on to father at least thirteen children, some of whom were conceived at the same time censorious count was thundering in print against the evils of sex.? (122) Chris McCandless has been infatuated by literature since he was little; he enjoys reading about nature and finding himself in it. Jack London and Leo Tolstoy are Chris? two favorite authors. Chris knows about the bad sides of their life, but he still accepts and honors them. Cronon?s assertion sheds light on why Chris can admire these people but can?t forgive his father. Chris? journey to Alaskan Wilderness indicates that he is ?imagining? his real home is in the wilderness. Therefore, Chris ?forgives? himself for not forgiving his father. When he goes to the wilderness, he pretends that he is coming to his ?true home? and he doesn?t want any baggage intimate relationship. Therefore, he never rethinks about forgiving his father, and he forgives himself for doing that. Likewise, Chris is able to forgive his literary heroes, for they share the same beliefs about nature as he does. ...read more.

Chris loves nature; however, people are surprising that he can?t even start a small fire to save his life? To explain Chris? action, Carine says, ?Chris would never, ever, intentionally burn down a forest, not even to save his life. Anybody who would suggest otherwise doesn?t understand the first thing about my brother.? (Krakauer 198) In previous chapters, we know that Chris? love for nature is influence by his grandfather, early reinforcement experiences climbing with his father, and literature. Cronon now brings up one more important factor which points out that Chris is a city people. For never working on the land, Chris doesn?t realize that nature is all human creation. For always living in an industrial- urban civilization and reading those ?fantastic? literatures, Chris makes a God out of nature. Chris does not only love nature, he absolutely believes in it like someone believes in a religion. In religion, sometimes people sacrifice their life to protect their beliefs. For instance, Christoph Probst, who was a medical student, was executed by the guillotine on February 22, 1943 for standing against the Nazis about his beliefs in catholic. He sacrifices his life for his love and beliefs in Jesus. In the same way, Chris gives up his life because he believes that nature is something wholly secret and shouldn?t be destroy even just a bit. Chris ?dreams? about wilderness as a God, and he need to protect his God. ...read more.