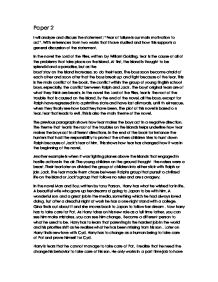 Paper 2 I will analyze and discuss the statement; "Fear of failure is our main motivation to act". With references from two works that I have studied and how this supports a general discussion of the statement. In the novel the Lord of the Flies, written by William Golding, fear is the cause of all of the problems that take place on the island. At first, the island is thought to be splendid and a paradise, but as the boys' stay on the island increases, so do their fears. The boys soon become afraid of each other and soon after that the boys break up and fight because of the fear. This is the main conflict of the book, the conflict within the group of young English school boys, especially, the conflict between Ralph and Jack. The boys' original fears are of what they think are beasts. ...read more.

Another example is when it was fighting planes above the islands that engaged in hostile actions in the air. The young children on the ground thought the noises were a beast. Their fear later on divided the group of children into either stick with Ralph or join Jack. The fear made them chose between Ralphs group that pursuit a civilized life on the island or Jack's group that follows no rules and are savagery. In the novel Man and Boy, written by tony Parson. Harry has what he wished for in life. A beautiful wife who gave up her dreams of going to Japan to be with him. A wonderful son and a great job in the media, something which he had always loved doing. But after a dreadful night at work he has a one night stand with a college. Gina finds out about it and she moves back to Japan to follow her dream. ...read more.

He grows as a person from a boy to a man. Harry tries to learn from his father how to take care of Pat. Harry's fear helps him realize that he needs to change to manage to take care of Pat it helps Harry to act in a more positive direction. Another example from the novel is Harry's fear to not find new love. He need to prove himself for Cyd. The way he need to do this is to be a better father for Pat. A reason for this is that Cyd would not let Harry be a role model or stepfather for Peggy if I can't take care of his own son. This is another fear that helps Harry to act and change through the novel. To sum up, we can say that fear of failure may have an influence of the plot of the book, also, the theme. The examples that I have written proves that fear of failure may make theme to act. We can recognize their situation. ?? ?? ?? ?? ...read more.