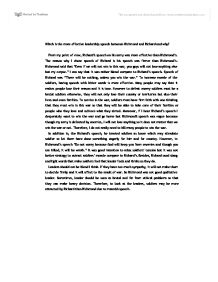 Which is the more effective leadership speech between Richmond and Richard and why? From my point of view, Richard's speech on his army was more effective than Richmond's. The reason why I chose speech of Richard is his speech was firmer than Richmond's. Richmond said that "Even if we will not win in this war, you guys will not lose anything else but my corpse." I can say that it was rather blend compare to Richard's speech. ...read more.

To survive in the war, soldiers must have firm faith with one thinking that they must win in this war so that they will be able to take care of their families or people who they love and achieve what they aimed. Moreover, if I hear Richard's speech I desperately want to win the war and go home but Richmond's speech was vague because though my army is defeated by enemies, I will not lose anything so it does not matter that we win the war or not. ...read more.

It was good intention to relax soldiers' tension but it was not better strategy to extract soldiers' morale compare to Richard's. Besides, Richard used slang and light words that make soldiers feel that leader feels and thinks as they do. Leaders should not be blend I think. If they have too much sympathy, it will not make them to decide firmly and it will affect to the result of war. So Richmond was not good qualitative leader. Sometimes, leader should be seen as brutal and far from ethical problems so that they can make heavy decision. Therefore, to look at the leaders, soldiers may be more attracted by Richard than Richmond due to mannish speech. ...read more.