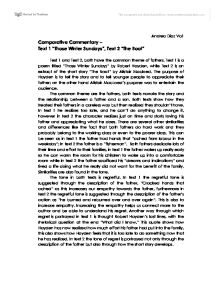 Andrea Diaz Va1 Comparative Commentary - Text 1 "Those Winter Sundays", Text 2 "The Boat" Text 1 and Text 2, both have the common theme of fathers. Text 1 is a poem titled "Those Winter Sundays" by Robert Hayden, while Text 2 is an extract of the short story "The Boat" by Alistair Macloed. The purpose of Hayden is to tell the story and to tell younger people to appreciate their father; on the other hand Alistair MacLoed's purpose was to entertain the audience. The common theme are the fathers, both texts narrate the story and the relationship between a father and a son. Both texts show how they treated their fathers in a careless way but then realized they shouldn't have. In text 1 he realizes too late, and he can't do anything to change it, however in text 2 the character realizes just on time and starts loving his father and appreciating what he does. There are several other similarities and differences like the fact that both fathers do hard work and they probably belong to the working class or even to the poorer class. ...read more.

The structure of text 1 is very different to text 2, first of all the fact that text 1 is a poem and text 2 a short story. As it was already mentioned, the regretful tone in text 2 is transmitted through the development of the story; the story is structured in paragraphs. The structure of the short story is very important as it starts by setting the scene as it describes the "good summer". In the second paragraph Alistair MacLoed describes the father and how he suffers and keeps on working, "his lips still cracked so that they bled when he smiled", this starts creating a tone of guilt as the character saw his dad suffer and did nothing. In the third paragraph we notice some transformation as he starts to realize the hard work his father does but it's in the last paragraph is where we see the biggest change as he changes his attitude and starts loving his father. Structure is also very important in text1, the poem. ...read more.

The use of the words "chronic angers" suggest tension in the family and opens the possibility of a long lasting fight happening inside the house, "speaking indifferently to him" also adds into the suggestion of tension in the house and the use of the word "indifferently" creates guilt as he treated his dad in an indifferent way. Furthermore Alistair MacLoed, the author of text 2 uses common diction through out the short story, the diction in both texts is very similar. MacLoed uses several times the word "and" there are several purposes for the use of the word "and", at the beginning, when describing the father's effort the word "and" is used for repetition as it increases the effect of empathy in the sentence. Later on in the story the word "and" is used to link ideas and to establish a good relationship between father and son as the text reads with a happier but still regretful tone. In conclusion both texts have clear similarities and differences as they both shared the topic of fathers and their relationship with their sons, though they have different purposes and therefore differences. ...read more.