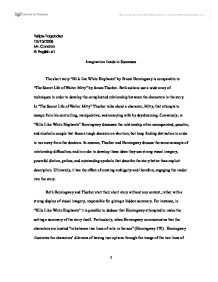 Felipe Fagundes 10/10/2008 Mr. Condon IB English A1 Imagination Leads to Successes The short story "Hills like White Elephants" by Ernest Hemingway is comparable to "The Secret Life of Walter Mitty" by James Thurber. Both authors use a wide array of techniques in order to develop the complicated relationship between the characters in the story. In "The Secret Life of Walter Mitty" Thurber talks about a character, Mitty, that attempts to escape from his controlling, manipulative, and annoying wife by daydreaming. Conversely, in "Hills Like White Elephants" Hemingway discusses the relationship of an unacquainted, peculiar, and alcoholic couple that faces a tough decision on abortion, but keep finding distraction in order to run away from the decision. In essence, Thurber and Hemingway discuss the same concepts of relationship difficulties; and in order to develop these ideas they use strong visual imagery, powerful diction, pathos, and outstanding symbols that describe the story better than explicit description. Ultimately, it has the effect of creating ambiguity and therefore, engaging the reader into the story. ...read more.

The diction of the phrase, "doesn't prove anything" is the strongest example of diction because in that moment it becomes clear the man's distrust for the woman, and the bases for their dysfunctional relationship. Nevertheless, in "The Secret Life of Walter Mitty" Thurber uses the same techniques, like when Mitty says that his own wife "seemed grossly unfamiliar" (Thurber 545). The unsympathetic words "grossly unfamiliar" serve the effect of showing Mitty's disproval of his wife's actions and attitude towards him. Hence, it becomes possible to affirm that both of the authors use subtle words in the character's conversation, allowing readers to get to the sense that the characters have a wearisome relationship. The authors also use those carefully placed words in order to show how persuasive the other characters can be. In both of the short stories the authors use, negative connotation and pathos in the dialogues between characters in order to better transmit the idea that persuasion can often lead to problems among people. ...read more.

Likewise, in "The Secret Life of Walter Mitty" Mitty sees himself "[facing] the firing squad; erect and motionless, proud and disdainful..."(Thurber 550). This description reveals that Thurber used the firing squad as a symbol for the solution of Mitty's problems, which would be death, even if it is only a psychological one. Therefore, it becomes clear through the well-placed symbols, of bags and firing squad that the characters' problems need to be faced. Both Thurber and Hemingway effectively use strong visual imagery, powerful diction, pathos, and outstanding symbols to transmit their ideas, about, for example, that if avoided problems will always haunt people and in particular, troublesome relationships. Ultimately, the main reason for the success of both Hemingway and Thurber was the fact that they were showing the stories rather than just telling it. This, technique allow the story to be more intriguing and engaging since it creates ambiguity and therefore leave room for different interpretations of the works. Ambiguity is important because it permits the reader to draw several different conclusions from the same excerpt and at the same time the author to communicate several different themes. Word count (excluding quotes): 997 85 words in the quotations ?? ?? ?? ?? 1 ...read more.