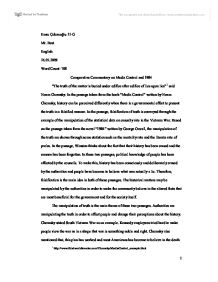 Comparative Commentary on Media Control and 1984

Emre �obanoglu 11-G Mr. Best English 16.05.2009 Word Count: 708 Comparative Commentary on Media Control and 1984 "The truth of the matter is buried under edifice after edifice of lies upon lies"1 said Noam Chomsky. In the passage taken from the book "Media Control" written by Noam Chomsky, history can be perceived differently when there is a governmental effort to present the truth in a falsified manner. In the passage, falsification of truth is conveyed through the example of the manipulation of the statistical data on casualty rate in the Vietnam War. Based on the passage taken from the novel "1984" written by George Orwell, the manipulation of the truth are shown through some statistics such as the mortality rate and the literate rate of proles. ...read more.

Chomsky also mentioned that, this plan has worked and most Americans has become to believe in the death 1 http://www.thirdworldtraveler.com/Chomsky/MediaControl_excerpts.html rate of Vietnamese is less than the actual figures which shows the readers the authorities can re-arrange bad thoughts and restore good feelings and change people's minds whenever they want. Comparing with Chomsky's passage, the same theme is covered in the passage from the "1984". The tone of both passages is critical. In the passage taken from Media Control, Chomsky criticizes the government's control over the media and its utilization of media to distort the truth about America's war against South Vietnam. According to Chomsky, US government succeeded affecting the nation's views and feelings towards war through such media propaganda. At this point, the writer criticizes the US government's foreign policy regarding South Vietnam and states that the US government has total control ...read more.

Thus, Winston criticizes implicitly his discomfort regarding the Big Brother's exposure through telescreens and implies that he is currently unhappy with the situation. With these ideas in mind, it is obvious that Chomsky and Winston are critical of an authority or government which directly affects the tone of the language in both passages. In summary, the manipulation of truth is explained with a critical tone in both of these passages. Political knowledge of people has been affected by the councils. In order to achieve this, history has been consciously and deliberately erased by the authorities and people have become to believe what was actually a lie. Therefore, falsification is the main idea in both of these passages. The historical matters may be manipulated by the authorities in order to make the community believe in the altered facts that are most beneficial for the government and for the society itself. 1 ...read more.