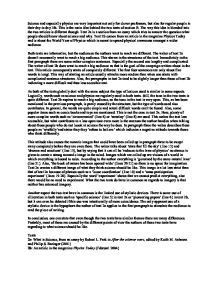 Science and especially physics are very important not only for clever professors, but also for regular people in their day to day life. This is the main idea behind the two texts of section B. The way this idea is blended into the two articles is different though. Text 2a is a section from an essay which tries to answer the question what people should know about science and why. Text 2b comes from an article in the magazine Physics Today and is about the World Year of Physics which is meant to spread physical awareness amongst a wider audience. Both texts are informative, but the audiences the authors want to reach are different. The writer of text 2a deosn't necessarily want to reach a big audience. This shows in the structuree of the text. Immediately in the first paragraph there are some rather complex sentences. ...read more.

In general, the words are quite simple and actual difficult words can't be found. Also, some popular items such as comic books and toys are mentioned. This is not the case in text 2a. Here, plenty of more complex words such as 'circumvented' (line 6) or 'scrutiny' (line 8) are used. This makes the text less accessible, but what contributes to a less open tone even more is the sarcasm the author handles when talking about those people who do not loook at science the way he does. In paragraph three the writes describes these people as 'wistfully'and states they they 'refuse to believe' which indicates a negative attitude towards those who think differently. This attitude also causes the romatic images that could have been called up in paragaph three to be swept away completely before they are even there. The writer talks about 'stars that fill the sky' (line 13) ...read more.

Another aspect the two text have in common is the limited use of stylistic devices. There is some use of alliteration in both texts such as 'specific science' (line 5) in text 2a or 'pioneering papers' (line 6) in text 2b, but it can even be debated if this use was intentionally of mere coincidence. The only apparent use of a stylistic device is the hypophora the author of text 2a applies in the first paragraph to stimulate the audience to read the piece of writing. In conclusion, one can state that even though the two texts have similar themes there are many differences. Probably, most of these are caused by the different points of view the authors of these two texts have regarding to what science should be like. Texts 2a: What is Science, from an essay by Robert L. Park in After the science wars, edited by Keith M. Ashman and Philip S. Baringer (2001) 2b: An article in the magazine Physics Today (Februari 2004) ...read more.