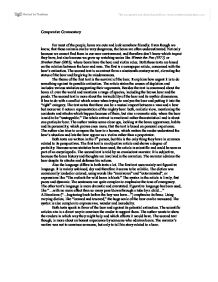 Comparative Commentary For most of the people, bears are cute and look somehow friendly. Even though we know, that those animals can be very dangerous, the bears are often underestimated. Not only because we cannot find them in our near environment, and therefore don't know which impact they have, but also because we grow up watching series like Winnie the Poo (1977) or Brother Bear (2003), where bears have the hero and victim roles. Both these texts are based on the relation between the bear and man. The first is a newspaper article, concerned with the bear's extinction. The second text is an extract from a nineteenth-century novel, elevating the status of the bear and forgiving its misdemeanors. The theme of the first text is the survival of the bear. ...read more.

The whole extract is emotional rather than statistical and is about one particular bear. The author makes some close ups, looking at the bears appearance, habits and its personality, which proves once more, that the text is based on personal experience. The author also tries to compare the bear to a human, which makes the reader understand the bear's situation and lets the bear appear as a victim rather than a perpetrator. Both texts are written in the 3rd person, but this is the only thing they have in common related to its perspectives. The first text is an objective article and shows a degree of partiality. Because some statistics have been used, the article is scientific and could be seen as part of an encyclopedia. ...read more.

The other text's language is more dramatic and overstated. Figurative language has been used, like "...with no more effect than so many peas blown through a tube by a child..." Alliterations ("...beginning back before the boy was born...") emphasize its fame. Using varying diction, like "loomed and towered," the huge scale of the bear can be measured. The syntax is also complex to express awe, wonder and incredulity. Both texts speak in favor of the bear and against its potential extinction. The scientific articles aim is a direct way to convince the reader to support them. The author wants to show the readers in which way they might help and which effects it would have. The second text though, is more about an honest experience by someone who admires bears. The narrator's motive was not to convince someone, but only to tell his story related to a bear. ...read more.