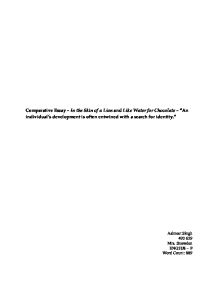 Comparative Essay - In the Skin of a Lion and Like Water for Chocolate - "An individual's development is often entwined with a search for identity." Ashneet Singh 493 629 Mrs. Snowden ENG3U8 - F Word Count: 889 Throughout time, man has struggled far and wide trying to find an identity in this world in order to contribute to society. In the two novels, In the Skin of a Lion, and Like Water for Chocolate, both authors portray the development of one's character through the distinct search for one's identity by shining light on the isolated lives of central characters, such as Patrick Lewis and Tita De La Garza, respectively. Central characters in both novels are portrayed as isolated from society, or from family, thus showing the struggle in their search for identity. Michael Ondaatje introduces Patrick as a blank canvas, having no position in society. Patrick's father, Hazen Lewis, "did not teach him anything, no legend, no base of theory. The boy watched him [...] pack equipment neatly back into his wooden case." ...read more.

Along with isolation, Tita is wedged under the family tradition of "not marrying until Mami dies," which has given Elana (Tita's mother) control over Tita's emotions, due to which Tita's inner self is unable to emerge out of her soul. Isolation from society and family is a factor in both novels, which has confronted the search for identity for the central characters. Both authors have shined some light on the central characters by allowing them to be exposed and aided by other characters to develop their self confidence and awake their senses. Michael Ondaatje introduces Alice, who educates Patrick about the condition between the rich and poor. "You can bet the rich don't know it. [...] They get skin burns from the galvanizing process. [...] You name the enemy and destroy their power." (124 Ondaatje) Patrick is educated about the conditions that the poor work in, which are neglected by the rich, and he 'observes' the sense of rebellion in Alice, and the ability to have an opinion and morals, hence the first development in Patrick's character is established. ...read more.

As a result, Tita's inner conscience has awakened, and she is able to confront Elana's ghost. "'I know who I am! A person who has a perfect right to live her life as she pleases. Once and for all, leave me alone; I won't put up with you! [...] I've always hated you!'" (199) Tita has let her anger exit her soul to rebel against Elana's tradition, and as a result, by achieving her life long wish, love, she has expressed her inner Tita. Both authors have presented the distinct ways in which central characters fight the struggle for identity, however Ondaatje portrays identity as one's life story, whereas Esquivel portrays it as the inner character ignited by the fire in one's soul. In conclusion, Ondaatje paints the blank canvas of Patrick with life stories of different people, whereas Esquivel ignites Tita's soul with courage, confidence, and love, and all in turn build individuality, personal identity, and self realization from isolation. The purpose in life, as concluded from these novels, is merely to find an identity, be that 'someone' in society and be on the spotlight to tell their story of isolation, hatred, and love. ...read more.