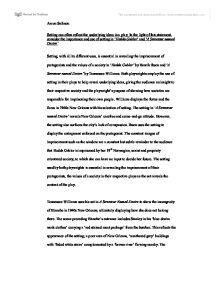 Setting can often reflect the underlying ideas in a play. In the light of this statement, consider the importance and use of setting in 'Hedda Gabler' and 'A Streetcar named Desire' Setting, with all its different uses, is essential in revealing the imprisonment of protagonists and the values of a society in 'Hedda Gabler' by Henrik Ibsen and 'A Streetcar named Desire' by Tennessee Williams. Both playwrights employ the use of setting in their plays to help reveal underlying ideas, giving the audience an insight to their respective society and the playwright's purpose of showing how societies are responsible for imprisoning their own people. Williams displays the fortes and the flaws in 1940s New Orleans with his selection of setting. The setting in 'A Streetcar named Desire' reveals New Orleans' carefree and come-and-go attitude. However, the setting also surfaces the city's lack of compassion. Ibsen uses the setting to display the entrapment enforced on the protagonist. The constant images of imprisonment such as the window are a constant but subtle reminder to the audience that Hedda Gabler is imprisoned by her 19th Norwegian, sexist and propriety orientated society; to which she can have no input to decide her future. The setting used by both playwrights is essential in revealing the imprisonment of their protagonists, the values of a society in their respective plays as the set reveals the context of the play. ...read more.

Most of all, women are subjugated. This setting is essential in revealing the Hedda's captivity in her society as it puts what she says and interacts with in context, allowing the audience to understand the gravity of her tragic situation. As Hedda and John Brack are talking, Hedda becomes very bitter about her obviously dull life. Brack starts to frustrate her with his hopeful and wishful thinking about her future, to which she eventually replies while standing 'over by the glass door' and 'looking out'; 'I've only got a gift for one thing in the world........ For boring myself to death. She realises that in her society she has only two purposes; to marry and to have children. It is clear that she realises this because she knows how boring her life is and she doesn't do thing about it. It becomes clear to the audience that Hedda is trapped by her own society in that it won't accept her as a man would be. She knows that there is fun and enjoyment to be had. One would say she can see it thought the 'glass door'. But this, again, is a barrier for her that she can't get past. This is what makes Hedda Gabler such a tragic tale; she knows what independence and enjoyment can be had outside the walls of her house (which she never leaves in the entirety of the play), but she cannot escape them. ...read more.

This is very confronting for the audience because if an average woman in 1940s New Orleans can't even show compassion towards her sister and only family left in the world, then who will. In Both plays, this lack of compassion could be the clincher that led to the fate of both protagonists. All Blanch and Hedda ever wanted was just to fit into their respective societies. But the setting didn't allow them to do so. The setting is ultimately fundamental in revealing the entrapment enforced on both protagonists as the characters representing the setting are able to show the audience the behaviour of their societies; which have deficits in levels of compassion. The setting used by both playwrights is essential in revealing the imprisonment of their protagonists, the values of a society in their respective plays as the set reveals the context of the play. Ibsen's Hedda Gabler and Williams' A Streetcar Named Desire are similar in a way as their respective settings reveal the lack of concern and empathy for their respective societies; this deficiency in sympathy towards the protagonists; Hedda and Blanche ultimately leads to their tragic fates. However, the plays are different in that Blanche's imprisonment in 1940s New Orleans is presented by her incongruity to the setting and New Orleans' care-free attitude. Whereas Hedda is imprisoned in 19th century Norway by the social ranked, sexist and proprietary orientated society. ?? ?? ?? ?? Aaron Snibson ...read more.