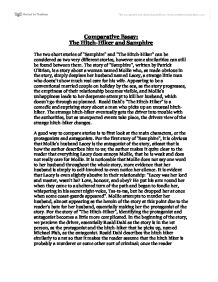 Comparative Essay: The Hitch-Hiker and Samphire

Comparative Essay: The Hitch-Hiker and Samphire The two short stories of "Samphire" and "The Hitch-Hiker" can be considered as two very different stories, however some similarities can still be found between them. The story of "Samphire", written by Patrick O'Brian, is a story about a woman named Mollie who, as made obvious in the story, simply despises her husband named Lacey, a strange little man who doens't show much real care for his wife. Appearing to be a conventional married couple on holiday by the sea, as the story progresses, the emptiness of their relationship becomes visible, and Mollie's unhappiness leads to her desperate attempt to kill her husband, which doesn't go through as planned. Roald Dahl's "The Hitch-Hiker" is a comedic and suprising story about a man who picks up an unusual hitch-hiker. The strange hitch-hiker eventually gets the driver into trouble with the authorities, but as unexpected events take place, the drivers view of the strange hitch-hiker changes. A good way to compare stories is to first look at the main characters, or the protagonists and antagonists. For the first story of "Samphire", it is obvious that Mollie's husband Lacey is the antagonist of the story, atleast that is how the author describes him to ...read more.

In these ways, the two stories are quite different in terms of protagonists and antagonists. Both stories are based closely on the conflicts and relationships within them. A distinct conflict can be found within the story of "Samphire" between the married couple of Mollie and Lacey. Throughout the story, the author makes it clear to the reader that everything her husband does annoys Mollie to the point that she simply stops caring: "At the next tobacconist, by the pier, he made the same joke to the man there. She stood near the door, not looking at anything". Though she hesitates at first, Mollie tries to push Lacey off of the cliff and nearly succeeds in killing him, elevating their conflict. Though at first the conflict seems to be between the hitch-hiker and the driver, the main conflict within "The Hitch-Hiker" comes down to the strife between the driver and the police officer. We are introduced to the hitch-hiker as a sinnacle, suspiscious looking man who appears to be nothing but trouble, and though the hitch-hiker tempts the driver to speed, he then saves the driver from the police officer by stealing the officer's black book. ...read more.

O'Brian does a good job of painting a picture of the enviroment and misery in "Samphire", where as Dahl uses descriptive imagery to show us exactly what the hitch-hiker would look and act like. One difference between the two stories is the atmoshphere of the stories; the atmosphere of "Samphire" is almost one of misery and emptiness, whereas the feeling that you get when reading "The Hitch-Hiker" is one of interest and intrigue, mostly wanting to see what the characters say to eachother and finding out who the mysterious hitch-hiker is. The major difference between the two stories in terms of literary presentation however is the conversation and interaction between characters within the stories. The only conversation within "Samphire" is done by the husband, whereas Mollie never talks, leaving the story to progress through actions rather than dialogue. On the other side, "The Hitch-Hiker" is based solely on the witty dialogue between the driver and his passenger that keeps the story progressing and interesting. Overall, the two stories have their similarities and their differences; while certain similarities can be found between the two stories' themes and conflicts, they each become unique when it comes down to the characters and overall literary presentation. ...read more.