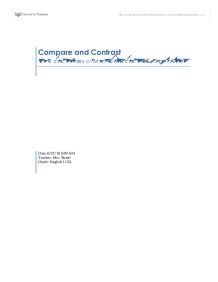 Both authors J.M Coetzee and Franz Kafka accentuate the idea of alienation and absurd through their writings "Life and times of Michel K " and "a hunger artist". The authors use a special technique, which does not require any feeling, making the stories impersonal and monotonous. Through this technique the authors manage to give us the impression that our characters always find a masochistic way to assuage their loneliness. In Life and Times of Michael K our main character Michel K creates this impression by always staying in the dark (in the night) and by wanting to be like a worm and become part of the Earth "I am more like an earth worm, he thought. ...read more.

On the other hand The Hunger Artist is also an example of a Kafkaesque style of writing. The hunger artist exposes his sufferance to the world, making a fool of himself and being watched at as a show. The hunger artist has a similar way of thinking as Michel K, he is considered stubborn, a freak of nature by the decisions he makes as to live his life as a loner, and by being different. The Hunger artist and Michael k both are considered specimens, study cases for people to observe, which gives them a certain level of popularity. The tone in The Hunger Artist is dull, making the reader to develop a sentiment of pity for the character. ...read more.

However The Hunger Artist is being alienated because of his decision of following his heart and creates art by starving and locking himself into a cage as to an animal; "...couldn't find a food which tasted good to me. If I had found that, believe me, I would not have made a spectacle of myself and would have eaten to my heart's content, like you and everyone else"(8th par). The idea of captivity illustrated in both stories underlines that the characters are prisoners in their own world and are captivated within their own masochistic way to assuage loneliness, Michael K living y his own initiative and the artist being am attraction to people because of his willingness of starvation. Thus the stories share the idea of absurdism as the characters chose misery over normality. ...read more.