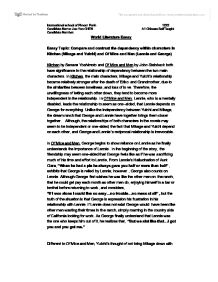 In the same way that Lennie relies on George because of his disability, death is the main trigger for the initiation of the reliance, "For some reason there's always death around us. My parents, my grandfather, my grandmother...your real mother, even Eriko. My god- in this gigantic universe there can't be a pair like us. The fact that we're friends is amazing. All this death...all this death" (50) this explains Yuichi and Mikage begin to take each other as part of their lives as the similarities they have around them. Yuichi and Mikage never considered themselves as a 'pair' or 'us', because of the death of Eriko, Mikage begins to use "pair likes us", which shows a change in the relationship, and the reason of using it now is because that they are both finally alone, they have no one left but each other. "Just the two of us was a warm, safe place where the future was on hold." (62)Again, she repeated the similar phrase "just two of us", to emphasis how the way she thinks about Yuichi has changed, and that now they are more dependent on each other. ...read more.

He had no purpose after death of Lennie, because Lennie was always the one that guarded George. This seems symbolic of George's dependences on Lennie and also shows the mutual need that Lennie and George had for each other. The significance in the connection between characters comes when Mikage brings Yuichi ramen, "Why is it that everything I eat when I'm with you is so delicious?" Mikage says, "Could it be that you're satisfying hunger and lust at the same time?" "No way, no way, no way!" he said, laughing. "It must be because we're family." Similarly to George taking care of Lennie despite not being family, Mikage went all the way from Izu to where Yuichi was located in the midnight just to bring Yuichi ramen, shows the importance of Yuichi to Mikage as a person and how she finally ended up going back to Yuichi although trying to get away from him. At the same time, Yuichi's enjoyment of eating with Mikage shows Yuichi's emotion depends on Mikage, and she is the one who can change how Yuichi is feeling. ?? ?? ?? ?? International school of Phnom Penh 1222 Candidate Name: Jou Yun CHEN A1 Chinese Self-Taught Candidate Number: ...read more.