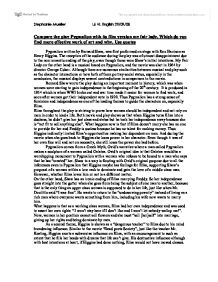 Compare the play Pygmalion with its film version my fair lady. Which do you find more effective work of art and why. Use quotes

Compare the play Pygmalion with its film version my fair lady. Which do you find more effective work of art and why. Use quotes Pygmalion written by Bernard Shaw, was first performed on stage with Rex Harrison as Henry Higgins. The reception of the audience during the play was of utmost disappointment due to the non romantic ending of the play, even though those were Shaw's initial intentions. My Fair Lady on the other hand is a musical based on Pygmalion, and the movie was shot in 1964 by director George Cukor. Although there are numerous similarities between musical and play such as the character interactions or how both of them portray social status, especially in the conclusion, the musical displays several contradictions in comparison to the movie. Bernard Shaw wrote the play during an important moment in history, which was when women were starting to gain independence in the beginning of the 20th century. It is produced in 1914 which is when WW1 broke out and war time made it easier for women to find work, and soon after women got their independent vote in 1920. Thus Pygmalion has a strong sense of feminism and independence as one of the leading themes to guide the characters on, especially Eliza. Eliza throughout the play is striving to prove how women should be independent and not rely on men in order to lead a life. Both movie and play shows us that when Higgins turns Eliza into a duchess, he didn't give her just class and status but he took her independence away because she is "not fit to sell anything else". ...read more.

Higgins, she has a flawless English however lacks a decent background, manners and taste. Thus social class is a combination of all of these and Pickering is the one who gives her the rest of her social class in addition to the language given by Higgins. So language also has an important role as shown in Higgins song "why cant the English?" where he says that Eliza is "condemned by every syllable that she utters". In the year 300 b.c. Aristotle made it clear that a tragedy usually ends in death and a comedy ends in marriage. Throughout the play, Bernard Shaw leads the characters in believing that Eliza will end up marrying Higgins or someone with very great richness, when in fact, Shaw does not follow Aristotle's rule and he breaks the whole build up of expectations that the audience had while watching the play. In contrast the film ends with Eliza entering Higgins' room and his ending line is "where the hell are my slippers" so the film allows us to believe they don't get married, it only hints it, and that if they do, he will be a dominant person in their relationship. However when Shaw wrote the play, and the movie changes his initial reasons of writing the ending the way he did, Shaw wanted to show that people who don't marry, such as Higgins, aren't disintegrated from their parents because they put their parents in high pedestals, which is also known as Oedipus tragedy. ...read more.

Even though she says quite firmly she would teach phonetics, it is obvious for the audience that teaching phonetics is not what she really wanted. So what the movie shows more clearly is that Eliza does indeed have options and that Higgins is afraid he will be without her. So what makes the ending of this movie such an attraction to the audience is that Eliza comes back to Higgins as a choice of her own and not as a need. Which is in fact exactly what Higgins likes: a person who makes their decisions based on rational thinking and not on weakness. In conclusion the film has added and taken away certain characteristics of the play, but this does not mean that one is better than the other, it only means that the author and the director had different propositions in mind as to what they wanted to show their audience. One could say that the main obvious difference between the play and the movie are the songs. The songs entertain the public and thus they are more appealed because it follows' a movies characteristics of those days, in addition it emphasizes Shaw's initial ideas of what the characters felt leading to the main themes of the play. For example when Eliza is in the market and she wished for comfort, warmth and chocolate. However the disadvantage is that the main theme of the play which is a criticism to high classes is lost, thus songs lose the main themes and makes the story appear more Hollywood like instead of being based on a book. ?? ?? ?? ?? Stephanie Mueller L6 HL English 29/09/08 ...read more.