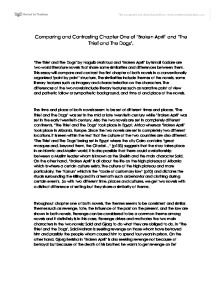 Comparing and Contrasting Chapter One of Broken April and The Thief and The Dogs.

The last theme that the two novels share is the theme of law. Said has been subject to the official system of Egyptian law and he was to obey the law if he wants to keep his relationship of his daughter Sana. In 'Broken April', it is a different law that Gjorg and the other people follow which is the Kanun and it is equivalent to a government law. Everyone obeys the Kanun no matter how difficult it is to obey because if they don't, there are consequences that won't do them any good. In chapter one of both novels, all of the themes are the same therefore the themes are something that they both have in common just like some of the literary features used in both novels. 'The Thief and the Dogs' and 'Broken April' share some literary features such as imagery. Both novels share animal imagery. Chapter one of 'The Thief and the Dogs' is dominated by animal imagery and the imagery are used in both positive and negative connotations. Said's former wife and friend are possible candidates for the dogs in the title and it showed when Said asks Ilish, "have you forgotten, Ilish, how you used to rub against my leg like a dog?" (p152) Said also refers to them as "cowering like mice" (p153), "you black beetle" (p154), "You mangy dogs!" ...read more.

Then she went off and started a relationship with Said's close friend Ilish. In 'Broken April', Gjorg was engaged but unfortunately he never go to marry her because his fianc�e "died a year after a long illness" (p20). Throughout chapter one, both characters don't change so as of chapter one, Said and Gjorg are both static characters. Overall both characters share similar conflicts, similar construction of the characters and development. Other characters such as Nabawiyya, Ilish, Sana from the 'Thief and the Dogs' and Zef and Gjorg's father from 'Broken April' are introduced in similar ways. They are introduced when the main character comes across them mentally or physically. Nabawiyya and Ilish are described through negative comments by Said while the other characters are not fully introduced yet; we are given bits and pieces about them. In conclusion, 'The Thief and the Dogs' and 'Broken April' share more similarities than they have differences. This is possible because both writers have used similar structures for the plot and characterization or it could just be a coincidence. The key difference between the two texts is the setting of the novels and the defining similarities between them were the themes and the characterization of the two novels. These three areas of the novel were either completely different or completely similar. Then other areas such as literary features and techniques where somewhat similar and there were some contrasts that could be made between the two novels. ...read more.