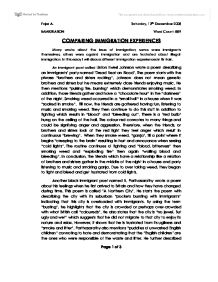 COMPARING IMMIGRATION EXPERIENCES Many wrote about the issue of immigration; some were immigrants themselves, others were against immigration and are frustrated about illegal immigration. In this essay I will discuss different immigration experiences in Britain. An immigrant poet called Linton Kwesi Johnson wrote a poem describing an immigrants' party named 'Dread Beat an Blood'. The poem starts with the phrase "brothers and sisters rocking", Johnson does not mean genetic brothers and sisters but he means extremely close friends enjoying music. He then mentions "pulsing fire, burning" which demonstrates smoking weed. In addition, those friends gather and have a "chocolate hour" in the "darkness" of the night. Smoking weed occurred in a "small hall" in a house when it was "soaked in smoke". Till now, the friends are gathered having fun, listening to music and smoking weed. They then continue to do this stuff in addition to fighting which results in "blood" and "bleeding out". There is a "red bulb" hung on the ceiling of the hall. ...read more.

By using the term "busting", he highlights that the city is crowded or perhaps over-crowded with what British call "coloureds". He also states that the city is "no jewel. But ugly and wet" which suggests that he did not migrate to that city to enjoy its nature and relax. However, it shows that he is frustrated from its ugliness and "smoke and litter". Parthasarathy also mentions "puddles of unwashed English children" connoting to hate and demonstrating that the 'English children' are the ones who were responsible of the waste and litter. He further described them as "unfriendly moors" which is a metaphor that describes his feelings towards the children of UK. He then describes the snow that "took away the city's wrinkles and gout". By using the icon 'snow' which symbolizes whiteness and purity, he indicates that it removed the obvious dirt in the Northern city resulted in being in "another planet". By saying another planet, Parthasarathy exhibits that the people and citizens of the Northern city have changed, making him think of the city "affectionately". ...read more.

They have been described as "unskilled" and owned "cheap, fake documents". Many citizens are feeling frustrated and fear from walking since they witness many of them in "large groups hanging around, looking for work". In conclusion, different people wrote different experiences concerning immigration. The three poems written by immigrants themselves showed that they feel lonely and homesick. It also demonstrated that they were are not comfortable being in Britain at first, but then got used to it and assimilated themselves. Contradictory, some such James, felt that they are part of Britain since they were educated and knew about the English literature more than some English people did. They also benefit Britain in opposition with those illegal immigrants that the BBC wrote about. They caused fear to the English citizens, unskilled and are paid less than the national minimum wage. They usually gather in gangs seeking for jobs. Many of them live together in a small room that can barely hold four persons. ?? ?? ?? ?? Fajer A. Saturday, 13th December 2008 IMMIGRATION Word Count: 889 Page 1 of 2 ...read more.