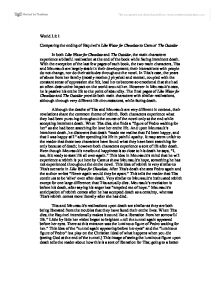 World Lit 1 Comparing the ending of Esquivel's Like Water for Chocolate to Camus' The Outsider In both Like Water for Chocolate and The Outsider, the main characters experience a blissful realization at the end of the book while facing imminent death. With the exception of the last few pages of each book, the two main characters, Tita and Meursault are largely static in their development; their interactions with people do not change, nor do their attitudes throughout the novel. In Tita's case, the years of abuse from her family (mostly mother,) physical and mental, coupled with the constant sense of oppression she felt, lead her to become so emotional that she had an often-destructive impact on the world around her. However in Meursault's case, he is passive his entire life to the point of absurdity. The final pages of Like Water for Chocolate and The Outsider provide both main characters with similar realizations, although through very different life circumstances, while facing death. Although the deaths of Tita and Meursault are very different in context, their revelations share the common theme of rebirth. ...read more.

This tells the reader that Tita continues to be 'alive' even after death. Very similar to Meursault's insinuated rebirth except for one large difference: that Tita actually dies. Meursault's revelation is before his death, after saying his anger has "emptied me of hope." Meursault's anticipation of rebirth comes after he has accepted death as a certainty, whereas Tita's rebirth comes more literally after she has died. Tita and Meursault's realizations upon death are similar as they are both being liberated from the troubles that they have faced their entire lives. When Tita dies, the Esquivel intentionally makes it sound like a liberation from her sorrowful life." Little by little her vision began to brighten until the tunnel again appeared before her eyes. There at this entrance was the luminous figure of Pedro waiting for her." This idea of the "tunnel again appearing before her eyes" and the "luminous figure of Pedro" is a play on the Christian ideal of what happens when you die (seeing God at the end of the tunnel.) ...read more.

This sentence tells the reader a lot as he uses the word "realized." This shows that up until this point, Meursault had not known he was happy, thus showing the total change he made in character throughout the book, especially at the end nearing his death. This "realization" is liberation for him from the indifference he has shown throughout the novel. The realizations experienced by Tita and Meursault were a source of liberation from struggles faced earlier in their lives. The endings of Esquivel's Like Water for Chocolate and Camus' The Outsider share many differences and similarities. The two main characters, which are largely static throughout the novels, experience revelations in the face of death. Both of these revelations are liberations from troubles they face during the novel. These liberations come in the form of rebirth. As the lives of these characters are ending, the salvation they receive is in the form of afterlife, or rebirth. We see this directly in the death of Tita as her spirit stays alive, and Meursault whose emotions manifest as a desire to "start all over again." The conclusions of these novels are perhaps the most crucial parts as the main characters evolve from static to dynamic as they undergo massive changes. ...read more.