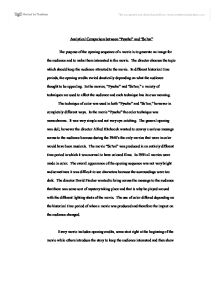 Comparison between Pyscho and Se7en

Analytical Comparison between "Psycho" and "Se7en" The purpose of the opening sequence of a movie is to generate an image for the audience and to make them interested in the movie. The director chooses the topic which should keep the audience attracted to the movie. In different historical time periods, the opening credits varied drastically depending on what the audience thought to be appealing. In the movies, "Pyscho" and "Se7en," a variety of techniques are used to affect the audience and each technique has its own meaning. The technique of color was used in both "Pyscho" and "Se7en," however in completely different ways. In the movie "Pyscho" the color technique was monochrome. It was very simple and not very eye catching. The general opening was dull; however the director Alfred Hitchcock wanted to convey a serious message across to the audience because during the 1960's the only movies that were in color would have been musicals. The movie "Se7en" was produced in an entirely different time period in which it was normal to have colored films. ...read more.

The music from the movie "Pyscho" was repetitive and had a fast tempo. The music created an anxious atmosphere which would have captivated the audience during the historical time period of the 1960's. The opening sequence of "Se7en" had no background music and then when the opening credits began the theme of the music was horror. The music matched the altering pictures that were being shown and created a kind of suspense. It was obvious that the movie would have something to do with murder because there were a variety of screeching sounds and in general the music was scary. The overall image of the opening sequence was mysterious and kept the audience interested. The style of music can have a great affect on the audience's opinion about the beginning of the movie. In conclusion, a range of techniques were used in the movies "Pyscho" and "Se7en" to create different effects on the audience. Each technique has its own meaning and is used in different situations. Depending on what the audience of a certain historical time period found appealing, the director then created a movie which would have interested most people. Word Count - 901 ...read more.