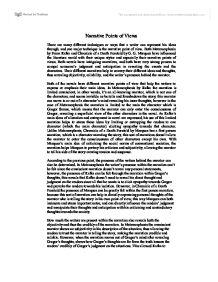 Narrative Points of Views There are many different techniques or ways that a writer can represent his ideas through, and one major technique is the narrative point of view. Both Metamorphosis by Franz Kafka and Chronicle of a Death Foretold by G. G. Marquez have influenced the literature world with their unique styles and especially their narrative points of views. Both novels have intriguing narratives, and both have very strong powers to compel someone's judgment and anticipation in revealing the events and the characters. Their different narratives help to convey their different ideas and thoughts, thus revealing objectivity, reliability, and the writer's presence behind the narrator. Both of the novels have different narrative points of view that help the writers to express or emphasis their main ideas. In Metamorphosis by Kafka the narration is limited omniscient, in other words, it's an all-knowing narrator, which is not one of the characters, ...read more.

With Marquez's main idea of criticizing the social norms of conventional societies, the narration helps Marquez to portray his criticism and subjectivity, allowing the narrator to tell his side of the story creating tension and suspense. According to the previous point, the presence of the writers behind the narrator can also be determined. In Metamorphosis the writer's presence within the narration can't be felt since the omniscient narration doesn't reveal any personal statements, however, the presence of Kafka can be felt through the narration within Gregor's thoughts, this reveals that Kafka doesn't need to reveal his direct thought and judgment on the readers since all that he wants is to elicit sympathy towards Gregor and provoke the readers towards his isolation. However, in Chronicle of a Death Foretold the presence of Marquez can be greatly felt within the first person narration, because this sort of narration can help in directly expressing ...read more.

This allowed Kafka to smoothly plot the story and to control the reader's judgment and anticipation, since the readers trust and do not question the narration. However, in Chronicle of a Death Foretold, the first person narration helped the writer in exposing his subjectivity and judgment on the events; this made the readers doubt the narrator's seemingly informative objective narration, nevertheless, this narrator is the readers' only source of knowledge. This helped Marquez to emphasis main thoughts that he wanted to stress by contradicting these thoughts and stating so many different views of a point. This also helped him to sustain the confusion that roamed the novel, and helped to create the anxiety and the eagerness to know the truth. Even though these narrative points of views were very much different from each other, however, they were both very successful in allowing the writers to express their different ideas in ways that also helped the writer to manipulate the events and the plot of each novel. ?? ?? ?? ?? ...read more.