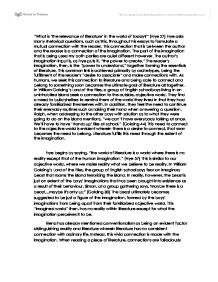 Comparison Essay of Lord of the Flies and The Educated Imagination

"What is 'the relevance of literature' in the world of today?" (Frye 27) Frye asks many rhetorical questions, such as this, throughout his essays to formulate a mutual connection with the reader. This connection that is between the author and the reader is a connection of the imagination. The part of the imagination that is being used my both parties are quiet different however. The author's imagination input is, as Frye puts it, "the power to create." The reader's imagination, then, is the "power to understand," together forming the essentials of literature. This common link is achieved primarily by archetypes, being the fulfillment of the reader's "desire to associate" and make connections with. As humans, we seek this connection to literature and being able to connect and belong to something soon becomes the ultimate goal of literature all together. In William Golding's Lord of the Flies, a group of English schoolboys living in an uninhabited island seek a connection to the outside, objective world. ...read more.

In William Golding's Lord of the Flies, the group of English schoolboys fear an imaginary beast that roams the island terrorizing the island. In reality, however, the beast is just an extent of the boys' imaginations that has been brought into existence as a result of their behaviour. Simon, at a group gathering says, 'maybe there is a beast....maybe it's only us.'" (Golding 80) The beast ultimately becomes suggested to be just a figure of the imagination, formed by the boys' imaginations from being apart from their familiarized objective world. This "imagined world" then, has no reality within literature except for what the imagination perceives it to be. Elena has already mentioned conventionalism as being an evident factor distinguishing reality and literature wherein literature has no consistent connection with ordinary life. Instead, this vivid connection is made with the imagination. When reading a piece of literature, connections are fallaciously believed to be made within reality, when actually it is made with our imagination. ...read more.

Despite this lack of realistic experience, Shakespeare manages to create literature; the reason for this being that his literature wasn't based on realistic experience, but rather literary experience. Literature, then, is a concrete world of immediate experience, where experience is made into reality. The limit of literature is imagination, which exceeds the capabilities of our objective world. Frye says, "The real realities, so to speak, are things that don't remind us directly of our own experience...but are such things which are bigger and more intense than anything we can reach, except in our imagination which is what we're reaching with." Ideally, Frye is supporting his earlier point of literary experience having a greater influence on successive literature, and imagination being the idealistic tool to attain this literary experience. Relating back to Frye's overall essay statement, literature is an extent of the imagination going beyond our objective world, creating a work for our imagination to extend into. ...read more.