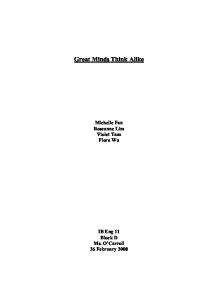 Comparison of Crime and Punishment and Julius Caesar

Great Minds Think Alike Michelle Fan Roseanne Lim Violet Tam Flora Wu IB Eng 11 Block D Ms. O'Carroll 26 February 2008 William Shakespeare's famous play Julius Caesar written in 1608 is here compared with Crime and Punishment written by Fyodor Dostoyevsky in 1866. Whereby the two authors lived in completely different times, both texts had similarly established their storylines around protagonists who committed crimes based on theories they believed in. For example, Brutus from Julius Caesar commits murder because of his patriotism; while Raskolnikov commits murder with his belief in the �bermensch theory. This similarity has then brought further realization of similar depiction of protagonists between the authors. Such similarities are prevalent by the manner the protagonists conceal their emotions from interfering with their paths to greatness. This ultimately leads to each protagonist's act of digging their own hole, whereby they alienate themselves from those they love. Hence this allowed for the ambiguous response from the audience, as we are shaped into the capability of hating and loving the protagonist from both texts. Thus, though these internationally-acclaimed texts were written by authors of different eras, a similarity exists in the fashion they have portrayed their protagonists. Primarily, both protagonists suppress their love for others in their search for greatness. The protagonist of Julius Caesar, Brutus, describes his suppression to his friends, "not that I loved Caesar less...as he was ambitious, I slew him. There is tears for his love." (Shakespeare, 3.2.26-27) ...read more.

/ Yet I insisted, yet you answer'd me not." (Shakespeare, 2.1. 241, 245) Through this quote, readers are introduced to the protagonist's alienation of wife Portia due to his patriotism. Brutus's insistent isolation denies the motif of emotional weakness, which is possessed by his foil Caesar when Calpurnia persuades him to stay home. The sharp contrast between these characters illustrates Brutus's honourable and heroic characteristics. The theme of lack of communication proves to be a tragic fallacy for both Brutus and Portia. If they'd openly shared the problem, the tragic downfall of both characters might've been avoided. The protagonist of Crime and Punishment, Raskolnikov, tells Sonya (Dostoyevsky, 291) that "[He] deserted [his] family today, so [He] shan't see them anymore." This quote highlights the theme of isolation, caused by his belief in the �bermensch theory. Raskolnikov chooses to desert his family because of his superhuman pursuit. However, his speech often reflects irony. His deep trustful relationship with Sonya foreshadows his incapability of achieving the superhuman state. Furthermore, Raskolnikov shows strong concern when Svidrigailov, Raskolnikov's foil and a round antagonist, attempts to harm Dunya, his sister, in Part V of the novel. Contradictory to his words, Raskolnikov reveals the motif of psychological uncertainty, which is closely related to his punishment. In both novels, the protagonists have attempted to isolate themselves from their families to achieve greatness. However, they regard their family and friends differently. Brutus is accompanied by friends throughout the play. The flat character, Lucilius, aids with Brutus's escape by impersonating him (Shakespeare, 5.4.7-8). ...read more.

I simply killed... for no one but myself... what I needed to know...was whether I was a louse or a man." (Dostoyevsky, 500) This quote signifies Raskolnikov's motive in committing murder was not based on utilitarianism but personal needs. The anaphora used for rejecting his previous justification of the crime reflects his self-realization. Pride is a motif in the novel. By admitting his misjudgement, Raskolnikov demonstrates his wounded pride. This highlights his psychological growth from the crime. By combining positive and negative characteristics, Shakespeare and Dostoevsky have successfully portrayed the protagonists like real people, possessing flaws and merits. Thus, in the end, both authors have created protagonists who attempt to achieve greatness - yet face difficulty in terms of overcoming relationships with important characters in their lives. Such difficulty halt their paths to greatness as it forces Brutus to find motivation to kill Caesar; and as it brings Raskolnikov to realize his inability to follow the �bermensch theory for he's unable to overcome human compassion. However, both also fight their battles before realizing they were not meant for greatness; Brutus and Raskolnikov alienate their loved ones, but discover they cannot endure their absence. This portrayal of the protagonists illustrates how though their deeds are evil, they are still human and suffer as humans do thus earning our empathy where it was first nonexistent. In conclusion, therefore, with such similarities present in each protagonist throughout both stories of radically different timeframes, the authors William Shakespeare and Fyodor Dostoyevsky had evidently shared an ability to establish similar yet effectual protagonists; in this case, Shakespeare and Dostoyevsky with their distinctive great minds thought alike indeed. ...read more.