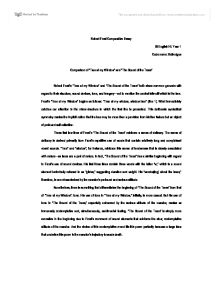 Robert Frost Comparative Essay IB English HL Year 1 Code name: thdtmdgus Comparison of "Tree at my Window" and "The Sound of the Trees" Robert Frost's "Tree at my Window" and "The Sound of the Trees" both share common grounds with regard to their structure, sound devices, tone, and imagery-not to mention the central leitmotif which is the tree. Frost's "Tree at my Window" begins as follows: "Tree at my window, window tree" (line 1). What immediately catches our attention is the mirror-structure in which the first line is presented. This deliberate syntactical symmetry carries the implicit notion that the tree may be more than a provision from Mother Nature but an object of profound self-reflection. These first few lines of Frost's "The Sound of the Trees" reinforce a sense of delicacy. The sense of delicacy is derived primarily from Frost's repetitive use of words that contain relatively long and complaisant vowel sounds. "Tree" and "window", for instance, reinforce this sense of tenderness that is closely associated with nature-as trees are a part of nature. In fact, "The Sound of the Trees" has a similar beginning with regard to Frost's use of sound devices. ...read more.

As can be seen in both poems, Frost has a penchant for nature, and namely the kinds of revelations into human thoughts derived from his observation of nature. In "The Sound of the Trees," we are introduced to an emotionally debilitated narrator who is inclined to make "the reckless choice" as he sees the "trees sway, from the window or the door (lines 17-18)." The reckless choice is most probably suicide, taking into consideration the overall context of the poem. What starts off as the narrator's complaint about the "noise of these" trees soon develops into a more serious and depressing contemplation. With the final line, "But I shall be gone," the narrator forebodes his death. "The Sound of the Trees" is not a tale of perpetual gloom and despair; for instance, as is clear from lines 15-16, "My feet tug at the floor/And my head sways to my shoulder," there are lyrical representations of a trees' movements. And Frost's close attention to the trees' swaying movements is yet another commonality between the two tree poems. In "The Sound of the Trees," these tree movements reflect clearly a need for contentment, which has to be pursued by a change, but the roots which "tug at the floor" perhaps are illustrating the limitations of that end. ...read more.

that is apparent in each stanza is a structural representation of the human spirit that desires freedom. With regard to "Tree at my Window," the most interesting lines are the last four. Whereas the tree is most concerned with the stormy or capricious weather conditions, Frost is most concerned with the weather, or thoughts, in his head. The tension between the nature and man comes to an end when, as Frost writes, "she put our heads together. It's not perfectly clear to what or to whom "she" is referring; however, clearly, this line is a reflection of Frost's ambiguous feelings. Frost sees in nature, namely in the tree, man's relation to the world. He realizes, basically, our place in the universe, and what it truly means to be a human. In fact, the remoteness of nature-and how it's partially covered by the lowered "sash"-reveals the tragedy of the narrator's solitude, and his relative insignificance in the face of vast forces, such as the diffuse cloud." To Frost, nature is obviously appealing, but it's also partially dangerous. It is the mirror of the human world that reflects our blemishes as manifestly our world's beauty. In conclusion, the most fundamental common ground between the two Robert Frost poems seems to be Frost's ambivalence towards nature, and in this case, trees. ?? ?? ?? ?? ...read more.