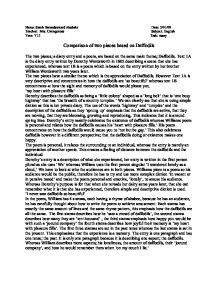 Comparison of two pieces based on Daffodils

Name: Sarah Barendswaard Abubakr Date: 2/01/09 Teacher: Mrs. Caringcross Subject: English Year: Y12 Task: essay Comparison of two pieces based on Daffodils The two pieces; a diary entry and a poem, are based on the same main theme; Daffodils. Text 1A is the diary entry written by Dorothy Wordsworth in 1802 describing a scene that she has experienced, whereas text 1B is a poem which is based on the entry written by her brother William Wordsworth two years later. The two pieces have a similar theme which is the appreciation of Daffodils. However Text 1A is very descriptive and concentrates in how the daffodils are 'so beautiful' whereas text 1B concentrates at how the sight and memory of daffodils would please you. 'my heart with pleasure fills' Dorothy describes the daffodils as being a 'little colony' shaped as a 'long belt' that is 'one busy highway' that has 'the breadth of a country turnpike.' We can clearly see that she is using simple diction as this is her private diary. ...read more.

Whereas Dorothy's purpose is for that when she rereads her dairy some years later, that she can remember what it is that she has experienced, therefore simple and descriptive diction is used. 'I never saw daffodils so beautiful' In the poem, William has 4 stanzas, each having a rhyme of ababcc, because he has an audience, he has carefully thought about how to write the poem to achieve amusement. Each stanza has exactly the same amount of lines and the same rhyme pattern, this emphasis how the daffodils are all the same. The first stanza describes how he 'saw a crowd of daffodils', the second stanza describes how many they are 'ten thousand' , the third stanza emphasis how happy you would be with such a 'jocund company' the fourth stanza describes how joyful their memory is 'my heart with pleasure fills'. The first three stanzas are set in the past tense whereas the last stanza is set in the present. This emphasizes that the experience is a memory. ...read more.

whereas William describes this as ' Fluttering and dancing in the breeze'. The difference is that the imagery inflicted by Dorothy is subtle in comparison with the poetic version of William. In conclusion both texts satisfy their purpose, Dorothy's text is merely an entry that is to be looked back at to remember a certain memory, she succeeds in doing so since the piece is very descriptive and inflicts imagery. Williams piece satisfies its goal as well since he wants his poem to be amusing to the reader. He uses poetic and emotive diction and his theme is based on how a memory can please someone which many can relate to, he has broke the ice between the daffodils and the individual who reads the piece, he has made the piece personal to many. That is the reason why I like the poem more than the entry, it is concise, poetic, easier to remember and you can relate yourself to the poem. The entry is descriptive and is personal to one person, not many can relate to it except the person who wrote it. ...read more.