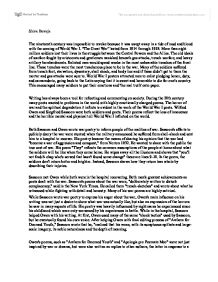 Shiva Baweja The nineteenth century was impossible to revoke because it was swept away in a tide of mud and blood with the coming of World War I. "The Great War" lasted from 1914 through 1918. More than eight million soldiers lost their lives in the struggle between the Central Powers and the Allies. The old ideals of warfare fought by aristocrats and gentlemen vanished beneath gas attacks, trench warfare, and heavy artillery bombardments. Enlisted men would spend weeks in the most unbearable trenches of the front line. These trenches were the most treacherous place to be in the war. Many of the soldiers suffered from trench foot, starvation, dysentery, shell shock, and body lice and if these didn't get to them the mortar and gas attacks were sure to. World War I posters attracted men to enlist pledging honor, duty, and camaraderie, going back to the Latin saying that it is sweet and honorable to die for one's country. This encouraged many soldiers to put their emotions and 'the real truth' onto paper. Writing has always been a tool for reflecting and commenting on society. ...read more.

His poetry was heavily influenced by nightmares he experienced since his childhood which were only worsened by his experiences in battle. While in the hospital, Sassoon helped Owen with his writing. At first, Owen used many of the same "shock tactics" used by Sassoon, but he eventually found his own voice. After helping Owen with final editing process of "Anthem for Doomed Youth," Sassoon wrote that he, "realized that his verse, with its sumptuous epithets and large-scale imagery, its noble naturalness and the depth of meaning. Owen's poems, such as "Anthem for Doomed Youth" and "Apologia pro Poemate Meo" were not just inspired by war or dreams, but were also written as replies to other authors, the latter in response to a remark by Robert Graves. Owen was not only powerful in his subject matter, but also technically, which is why Sassoon, Graves, and other poets admired his work. His use of para-rhyme added greatly to his poetry because it, "produces effects of dissonance, failure, and unfulfilment that subtly reinforces his themes," Both poets wanted to express their views and feelings about the war. ...read more.

Russell is credited by some with having been the catalyst leading to the issue of the Soldier's Declaration, which was sent to the papers and read out in the House of Commons in May, 1917. Sassoon, in the grip of a "neurosis", had by now thrown his Military Cross into the River Mersey and refused to report for duty. His glittering military record ensured that the authorities declined to court-martial him. Instead, he was sent for treatment to Craiglockhart Military Hospital in Edinburgh, where he met Owen. Even though the motive and the awareness both the authors were trying to express were the same, there is still a big difference in the way they are expressing these physical and mental emotions. I personally feel that no author in this world is comparable with another, there is always one thing that a author has over the other. In this case both Owen and Sassoon were close, and shared a "brotherly love" we can say, but the way of writing is different with every sense of emotion expressed by each author in each line in each word in each letter. The ENDDDDD. ?? ?? ?? ?? ...read more.